Sports presenter Sanjana Ganesan is on her first overseas tour after marriage with India paceman Jasprit Bumrah. The couple, who got married in a private ceremony in Goa in February this year, have spent a lot of time apart after their honeymoon with the Indian Premier League (IPL) 2021 getting underway in April.

However, both the Board of Control for Cricket in India (BCCI) and the International Cricket Council (ICC) have allowed the cricketers’ families to accompany them on the long tour of England which includes the World Test Championship (WTC) Final against New Zealand starting on June 18 followed by five-Test series against England. Sanjana and husband Bumrah checked into the Hilton at the Ageas Bowl in Southampton along with rest of the Indian men’s and women’s team on Thursday (June 3). 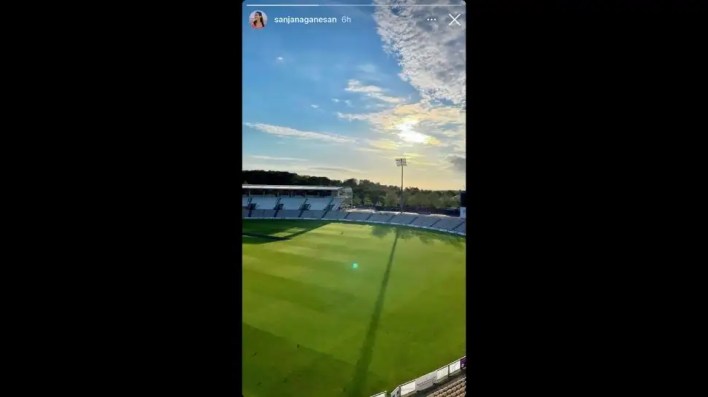 While husband Bumrah posted a picture of himself from the balcony of the couple’s room overlooking the Ageas Bowl – the venue of the WTC Final, Sanjana posted an Instagram story with a photo of sun-kissed Ageas Bowl ground on her arrival. The couple have managed to spend some time together and with Bumrah’s family after the IPL 2021 was suspended due to rising COVID-19 cases in India.

Last week (on May 31), Sanjana posted a gorgeous throwback picture from a beach and made fans wonder if it was actually from the couple’s honeymoon. One fan even felt that the photo was clicked by none other than Bumrah. The Star Sports presenter didn’t mention where or when the picture was clicked but just captioned it with an emoji of sun and posted ‘#throwback’.

Bumrah and TV presenter Sanjana Ganesan tied the knot in a private ceremony in Goa on March 15. The event was attended by very few guests apart from close family members due to the ongoing COVID-19 pandemic.

Bumrah, who was released from the bio-bubble after the conclusion pink-ball Test in Ahmedabad, returned to action in IPL 2021, in which he played seven matches and claimed six wickets.

Scientists Write To President, Say Proposed Law Is “Against Lakshadweep’s Culture”
24 mins ago