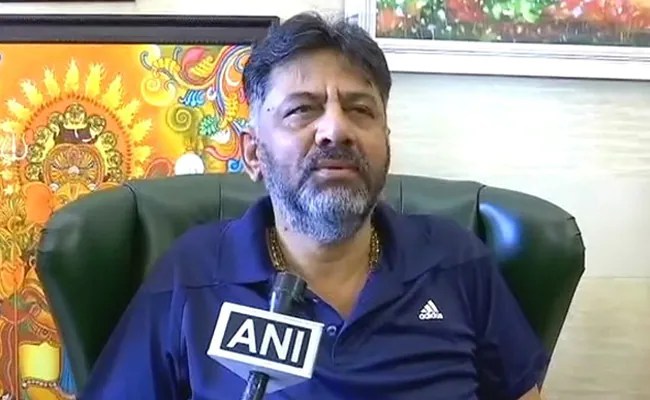 Once again blaming Karnataka Congress chief DK Shivakumar for the “sex scandal” allegedly involving former Minister Ramesh Jarkiholi, the family of the woman in the alleged video today said their daughter was under a lot of pressure.

They also requested the courts not to record her statement as she is “under duress”, she be given at least four days time to be with them, or kept in a place under court supervision and provided counselling.

Reacting to the charges, Mr Shivakumar said he doesn’t know anything and he has nothing to do with it. “….Let the investigation happen, they (family) were speaking under pressure.. if they have proof, let them give it.”

The family’s statement came amid reports that she would appear before a judge to record her statement, as her lawyer today moved an application of requisition before a magistrate court and said they are awaiting directions on producing her before it.

“We got to know through the media that our daughter will appear before the court. Through you (media), we urge the Chief Minister, all the Judges in Karnataka and the Home Minister… you have to consider that our daughter is under pressure for the last 20-25 days and has been forced to make statements,” the woman’s father said.

Speaking in Belagavi, he said if she appears before the court, she would be relieved from that pressure and her statement should then be recorded. “This is our request…she should be given time.”

The woman’s brother alleged that his sister was acting according to Mr Shivakumar’s diktats, was given some money by him and had not been in touch with the family for 20 to 25 days.

He said the family’s request to the court was to send her to them for at least four days to free her from the “torture” and ”pressure” she was undergoing.

If this could not be done, the court should make arrangements for her peaceful stay under its supervision.

“She should be counselled first,” he said.

Her other brother too alleged that she has been pressurized to issue statements all these days.

The video statements that have come out so far and “those that will come in future,” all of them are under the pressure of those who made the CD and MrShivakumar, he alleged.

The family said they were not under captivity, pressure or facing threats from anyone, as alleged by the woman, and added that they have been provided security.

“I want to tell my daughter that as an ex-soldier I’m ready to give her protection and she should come to us,” the father said.

He said the family, for the sake of his job, had been living in Belagavi district for 12 years and they had nothing to do with Jarkiholi or anyone in politics.

“I have strength to take care of my daughter. Who are these people, these politicians? Have they brought her up or given her education?”

The woman’s mother, with folded hands, said they wanted nothing else other than their daughter back. She said when she questioned her daughter about getting involved with politicians, she had replied that she was promised a job and nothing would happen to her.

“She told me four months ago that some one related to Shivakumar will get her the job.”

After the video clips started appearing on TV channels on March 2, she told her mother over phone they were morphed and edited. Since then, she had not been able to speak to her as her phone was taken away, the mother alleged.

The family said they had full faith in the police and judiciary and that their daughter had become “a pawn for political games.”

“We want her to come out of the current mindset. If she wants to come to us, we are ready to take her, she is our daughter,” they said.

On whether they will file a complaint against Mr Shivakumar, the parents said they first want their daughter back, after which they would consult lawyers. “We have 11 pieces of evidence,” they said.

The family on Saturday for the first time blamed Mr Shivakumar, accusing him of playing “dirty politics” by using their daughter.

Mr Shivakumar however had said he has nothing to do with the case as he has never met her and the probe should happen.

Their statement today came hours after the woman, in an unauthenticated letter to the Chief Justice, requesting him to personally supervise the probe, alleged that her parents were not given protection despite a request and they have been pressured to make statements.

Mr Jarkiholi, who was Water Resources Minister in Chief Minister B S Yediyurappa-led cabinet, resigned on March 3, a day after news channels aired videos of the alleged sex scandal.

While Mr Jarkiholi has repeatedly claimed his innocence and said that the video was “fake”, the woman had accused him of sexually “using” her, cheating and threatening her after promising a government job.

Not Surprising That China Operating In Indian Ocean: Navy Chief
17 mins ago

IPL 2021: RCB all-rounder Shahbaz Ahmed changes game with 3 wickets in an over against SRH – WATCH | Cricket News
52 mins ago