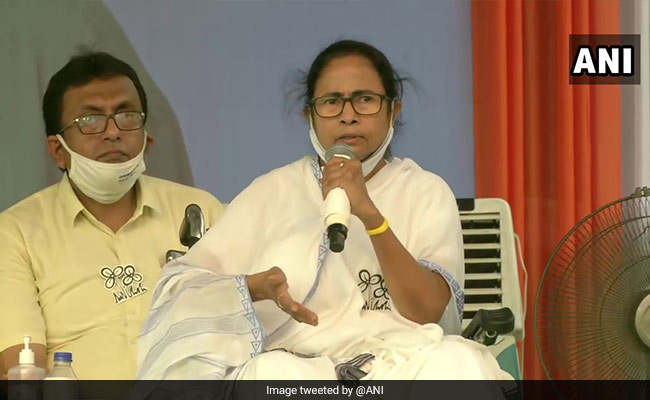 West Bengal Chief Minister Mamata Banerjee on Monday said she would introduce a bill in the state Assembly to ban those from politics who make inflammatory remarks on firing and shooting.

Speaking at a public rally in Dum Dum, Ms Banerjee said: “The BJP (Bharatiya Janata Party) has no shame. After killing four people, they are saying that four more rounds should have been fired. Is this how a political party speaks? We, in politics, should have a control over a tongue. What kind of a country are we living in. I am ashamed to call these people as part of Bengal. They should be arrested and banned from politics.”

“I will ask Saugata da (TMC leader Saugata Roy) to move a private bill in the House. Anyone who makes such kind of violent remarks, who say ”goli maardo”, should be politically banned,” she added.

Ms Banerjee also requested the Election Commission to not listen to the BJP and to become impartial.

Lashing out against Prime Minister Narendra Modi, the Chief Minister said: “I am really sad and ashamed, I haven’t seen this kind of PM who crosses the line while speaking. I have worked for all religions. What have I not done? Now only one thing is left, ”BJP hatao desh bachao”.”

She also chastised PM Modi for going to the United States to play the ”Trump card” and later to Bangladesh to play the ”Bengal card”, while referring to the Left and Congress parties as ”BJP agents”.

Ms Banerjee also said she will resign from politics if the rival party can highlight one work she had neglected.

“Didi has waged an open war against Modi as well as my brothers and sisters from SC, ST, OBC in Bengal. She has started a campaign to discredit the ordinary voters of Bengal,” PM Modi said while addressing an election rally ahead of the fifth phase of the Assembly polls.

He said the people of Bengal have confirmed the victory of the BJP in the first four phases of polling, something which has irked the Trinamool Congress supremo.

Aishwarya Rai, Aaradhya get a warm welcome in Cannes, Abhishek Bachchan hurries into hotel
41 mins ago

Government is setting up solar plants for free, know the whole process
42 mins ago

The Sari Is a Story: As she walks the red carpet, Deepika Padukone concurs with Sabyasachi
56 mins ago