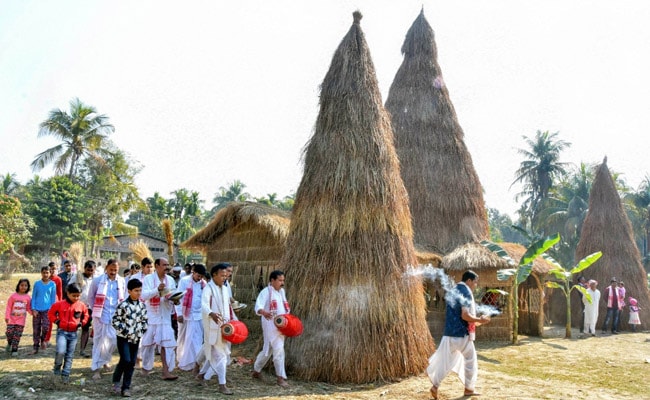 Committees set up to celebrate Bihu – a set of three Assamese harvest festivals that starts from Wednesday – have expressed annoyed at SOPs and restrictions – including twice-daily sanitisation of venues – announced by the state government to combat the spread of the coronavirus.

An umbrella body of organising committees has accused the state of “passing this responsibility” while looking the other way as thousands attended election rallies – some led by Prime Minister Narendra Modi – in apparent violation of central government and Election Commission guidelines.

“Why were no such SOPs issued during the days when poll campaigns were carried out.. when there was open violation of such protocols across the state…” Pranab Goswami, the General Secretary of the Sadou Asom Bihu Sanmilani Samannayrakshi Samiti, asked.

“Controlling COVID-19 is not our job. Why is the administration passing on this enormous responsibility only to committees organising Bihu celebrations?” he continued.

“The government issued SOPs unilaterally… none of the stakeholders were taken into confidence. A number of points are not at all acceptable. For example, one SOP says Bihutolis must be sanitised twice daily. How is it possible… has to be by the Health Department,” Mr Goswami added.

They have also expressed displeasure over the SOPs being issued at the “last minute”; about 80 per cent of the organisational work has already been done, they said.

Daily new Covid cases in the northeastern state have spiked since the start of the month – the active caseload has nearly doubled to 3,249 as political parties, including the ruling BJP, held rallies, roadshows and events to campaign for the three-phase polls that concluded last week.

With India in the grips of a deadly second wave of infections – over 100,000 have been reported per day since April 7 – and the lack of social distancing in the election events, Assam is bracing for a steep increase in new cases. And the organising committees say they are being made to pay.

Social events and functions – attended by thousands – during Bihu can go on for over a month, and are also an important source of income for artists and small business owners.

Many of them were badly hit by cancellation of Bihu functions last year – as India went into a Covid lockdown from March – and were hoping that things would be different this year.

Faced with the new rules, organisers say the state should either not have allowed Bihu celebrations to happen or, if it chose to, then take up the responsibility of ensuring the norms are followed.