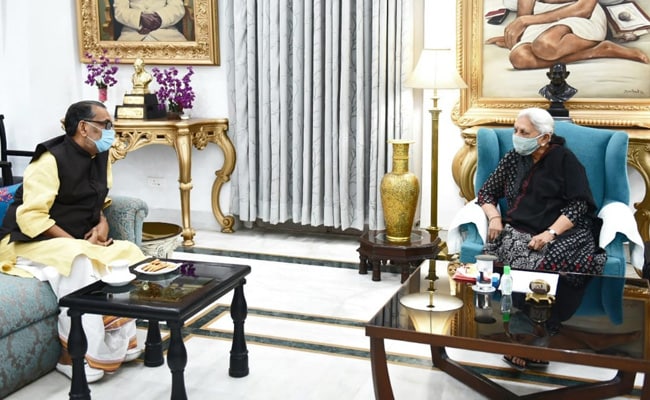 Senior BJP leader Radha Mohan Singh met UP Governor Anandiben Patel in Lucknow today — days after chairing a review meeting with Chief Minister Yogi Adityanath, his ministers and party leaders. Asked if he had informed the Governor about an expansion in the Yogi Adityanath cabinet, Mr Singh said while berths were available in the government, it was upto the Chief Minister to expand his cabinet.

Dubbing his meeting with the UP Governor a “courtesy call”, Mr Singh said, “Since I became the in-charge of the state, I have not met the Governor”. Mr Singh was given charge of the party’s state unit in November last year.

The 30-minute meeting raised eyebrows in the backdrop of reports of unrest within the state BJP about Yogi Adityanath continuing in the top post. While the BJP made it clear that the Chief Minister will stay, for now, the timing of the meeting puzzled many.

Mr Singh was in Lucknow since Monday and left for Delhi on Wednesday with party colleague BL Santosh. Sources in the BJP said the leaders had carried out an appraisal of Yogi Adityanath’s performance as Chief Minister, especially during the recent Covid surge in the state.

Asked about the Chief Minister today, Mr Singh said Yogi Adityanath was doing a “fine job”. “Everyone believes in his mettle. Everyone knows that he has done the work of Corona recently,” he added.

“The UP government and the BJP organisation is functioning very well… It is the strongest party unit and the most popular government across the country,” he added.

There have been murmurs in the party against Yogi Adityanath, with several leaders, in private, expressing concern about the Chief Minister’s handling of the Covid crisis. The rampage of the virus through the rural areas — as indicated by the thousands of bodies found buried on the banks of Ganga and floating down the river — may take a toll on the hustings too, some leaders fear. There is less than a year to go for the state elections.

Over the weekend, the BJP trashed speculation about a change in leadership and sources said the party will contest the state polls under Yogi Adityanath.

But there were indications about a change in cabinet. Former bureaucrat AK Sharma – a close aide of Prime Minister Narendra Modi — may be given an important role in the state government, sources said.

BJP chief JP Nadda is likely to visit UP next month to oversee efforts to repair the party’s structure and functioning.