New Delhi: Bollywood actress Kangana Ranaut is making headlines after she liked a tweet by an unknown user claiming that actor Sonu Sood is a fraud on Monday (May 3).

The tweet was made by a user named ‘Maithu’ and he had taken to Twitter to bash humanitarian Sonu Sood by calling him a fraud and accused him of using the COVID-19 crisis to make money.

Such a fraud using a crisis to make money 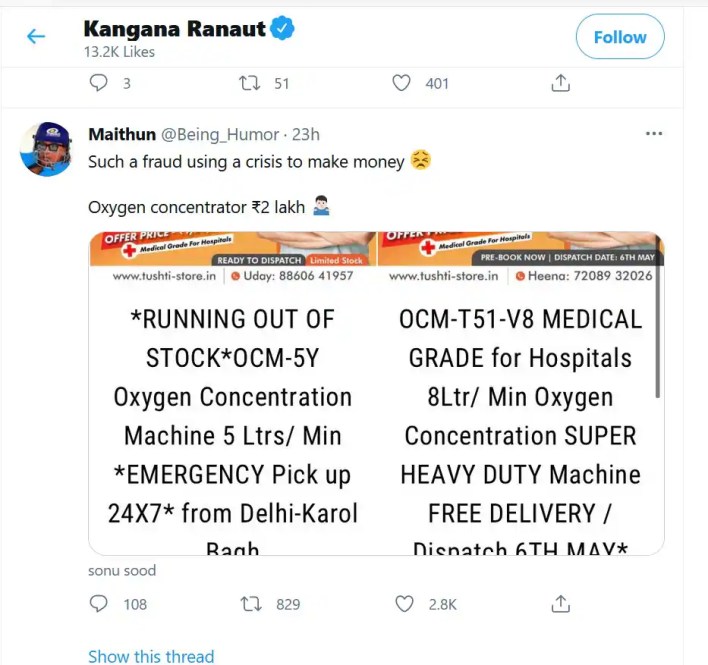 Recently, she had also spoken about she is unhappy with more and more oxygen plants being set up to meet the shortage during the second wave of COVID-19 pandemic and said how were we going to compensate for the oxygen taken away from nature.

Earlier, Kangana had made headlines when she slammed journalists and netizens for lambasting India on international news segments for its COVID-19 crises. She claimed this had completely tarnished India’s image.

On the work front, Kangana will next be seen in AL Vijay’s biopic on previous movie star and three times Chief Minister of Tamil Nadu J Jayalalithaa called ‘Thalaivi’.

She will also be seen in Razneesh Ghai’s action thriller ‘Dhaakad’ and Sarvesh Mewara’s ‘Tejas’.

Exclusive: I am living in London working all over the world amid pandemic, says ‘Out Of Love 2’ actor Purab Kohli | People News

Exclusive: I am living in London working all over the world amid pandemic, says ‘Out Of Love 2’ actor Purab Kohli | People News

Trending: This granny gives EPIC reply to grandson who pranked her by saying, ‘this is my father’s’ house’ – Watch | Buzz News