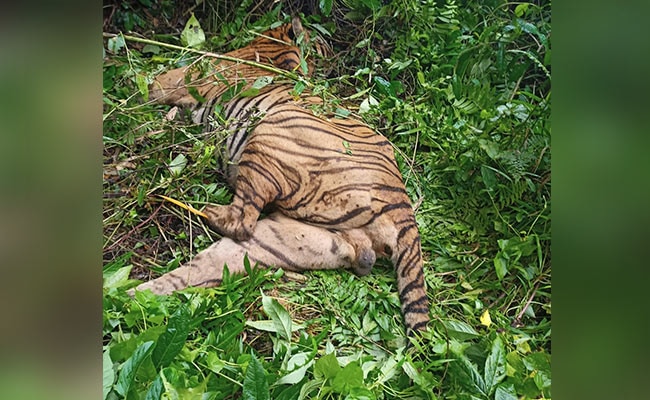 The forest department said the carcass was found at Karuabari area of Kaziranga national park.

The carcass of a male tiger with bullet wounds was recovered today at the Kaziranga National Park and Tiger Reserve in Assam. Forest officers have said the tiger was killed in accidental firing by forest guards.

The age of the tiger is believed to be around 10 years.

A brief statement issued by the forest department stated that the carcass was found at 7.10 am by forest personnel near Japoripathar in the Karuabari area. This spot is located in the peripheral area of the national park.

“On enquiry, it was found that the tiger died due to a bullet wound, suspected to be [from] accidental firing while trying to scare away the tiger from the public area,” the statement by the forest department said. It added that more details on the incident are awaited.

This is the third instance of a tiger carcass being recovered from the national park in recent times.

Earlier this month, the carcass of a four-year-old male tiger was found at the Sidha Kathani area of the national park. According to forest officials, the carcass had multiple injury marks and they suspected that the tiger died from injuries suffered during a fight with another male tiger.

The carcass of a female tiger cub with puncture marks on its neck and broken ribs was found in the national park in February. Forest officers said that the cub, aged around 4 months, might have been killed by an adult tiger.