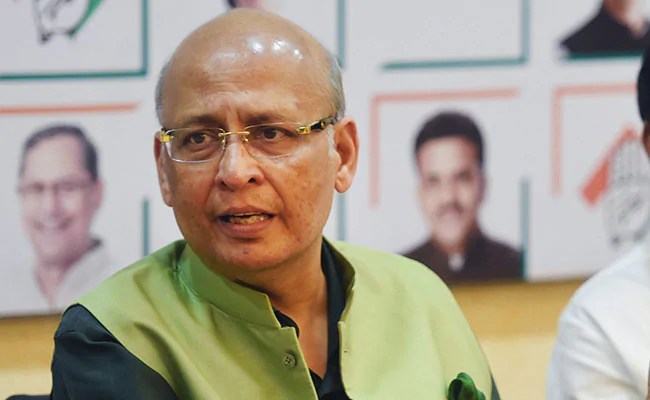 The Congress on Friday said the Supreme Court’s suo motu intervention in the management of COVID-19 in the country was “wrong” and “uncalled for”, and alleged that it amounts to over-centralisation of judicial powers.

The Congress also hit out at the government over its handling of the COVID-19 pandemic in the country where there is “shortage” of everything.

It said venerable institutions have to realise that their primary job is to protect the lives of citizens of India, not the reputation of the central government and demanded vaccine neutrality just like net neutrality.

Congress spokesperson Abhishek Singhvi said high courts were efficiently upholding the citizens’ right to life and holding the government accountable in a more nuanced way on a case-to-case basis and they should have been allowed to carry on their work.

“The Supreme Court’s intervention on April 22, 2021 is totally uncalled for. Unfortunately, it is wrong, wrong and wrong. It is wrong because it is not suo motu ameliorative but a reaction to palliative high court orders,” he said.

“It is wrong because decentralisation, and not over centralisation — judicial, administrative and societal — is the need of the hour,” he told reporters at a virtual press conference.

Mr Singhvi said it is wrong because the SC has not done and could not have done what diverse HCs have done, especially what the Delhi High Court did at 9 pm to give some relief to the oxygen starved common man of Delhi.

He asked why the high courts are being allegedly prevented from discharging their duties.

However, the Supreme Court on Friday observed that it did not stop high courts from hearing cases related to COVID-19 management in the country.

A bench headed by Chief Justice SA Bobde, who is demitting office as the CJI on Friday itself, rapped some senior advocates for making statements without reading its order passed on Thursday.

The Supreme Court also allowed senior advocate Harish Salve to withdraw as amicus curiae for the suo motu case related to distribution of essential supplies and services, including oxygen and drugs, during the COVID-19 pandemic.

Attacking the government over its inept handling, Mr Singhvi said, “There is a shortage everywhere at the peak of the crisis. This government defines shortages, shortcomings, and short-sightedness.”

He alleged that the priorities of the Prime Minister and the Home Minister reflect that they have become “inefficient, incompetent and indifferent towards the Covid crisis”.

He also asked why the government is allegedly under-reporting cases of infections and deaths and why has the number of tests gone down in places like Delhi, which is hardly conducting 1 lakh tests per day.

Mr Singhvi said, “It (SC intervention) is wrong because the Supreme Court is ill-equipped to deal with such local issues, local logistics and should not supplant that local touch on erroneous and fallacious touchstone of uniformity.”

“It is wrong because such orders have a demoralising, chilling, paralysing and negative effect on the excellent work being done by other non governmental institutions of governance, including high courts.”

The Congress leader said the SC intervention is wrong because it may have the unintended effect of legitimation of the “utter failure” of the central government on all fronts in its anti-COVID policies and actions.

“It is unfortunate and concerning to see the crucial office of the Attorney General being undermined. Why was he, as the number one constitutionally designated officer of the court, not even called upon,” he said.

Taking note of the grim situation created by the massive surge in COVID-19 cases and deaths, the Supreme Court had on Thursday said it expects the Centre to come out with a national plan to deal with proper distribution of oxygen and essential drugs for the patients.

Lok Sabha Speaker Should Look Into Fake News Of My Death: Sumitra Mahajan