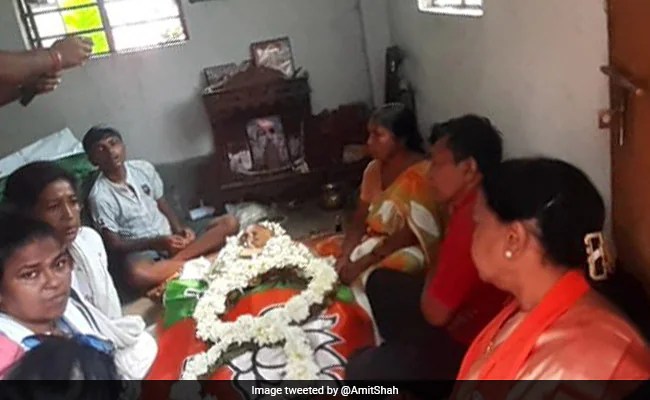 Shova Majumdar, the BJP’s worker’s mother who was allegedly beaten up by some Trinamool activists last month, has died. The 85-year-old’s death immediately sparked a war of words today, with the BJP playing on the Trinamool’s favourite slogan and saying “Ma, Mati, Manush” had been bloodied. The Trinamool, meanwhile, accused the opposition party of “peddling a narrative”.

A video of Ms Majumdar, narrating her painful experience with a badly swollen face, was shared by the BJP on social media last month. In his tweet today, Mr Shah posted the photo of her body wrapped in a BJP flag. Party chief JP Nadda, too, tweeted his condolences in Hindi, saying Ms Majumdar was “Bengal’s mother and daughter”.

Trinamool spokesperson Derek O’Brien, however, tweeted that “the incident” was still under investigation.

The death of Shova Majumdar is a tragedy.
What is totally unfortunate though is the Home Min peddling a narrative when the incident is under investigation. He heads a Police Force & multiple Central Agencies. Shouldn’t he show some respect to the investigative process of India!

West Bengal on Saturday completed the first of its eight-phase polling for the next state Assembly, with the BJP and the Trinamool involved in a high-decibel, vitriolic campaign against each other.

IPL 2021: RCB all-rounder Shahbaz Ahmed changes game with 3 wickets in an over against SRH – WATCH | Cricket News
11 mins ago

Mamata Banerjee Slams BJP At Rally, Says “You Brought Covid And Ran Away”
32 mins ago