Samsung Galaxy A52 is receiving an update that brings camera features from the Galaxy S21 series. Alongside, the update also comes bundled with April 2021 Android security patch and improvements to existing functions. The update is currently rolling out in Indonesia but should be released to other regions in the coming weeks. The smartphone was launched in March 2021 and runs Android 11-based One UI 3.1 out-of-the-box. Galaxy A52 features a quad rear camera setup headlined by a 64-megapixel primary sensor.

The update for Samsung Galaxy A52 was first spotted by TizenHelp. The update brings new features to the camera and a few improvements to existing functions. The camera gets three new modes in the portrait mode — High-Key Mono, Low-Key Mono, and Backdrop effect — along with improvements to picture quality. Additionally, Samsung has improved the call quality, stability of the touchscreen. It also upgrades phone security with the April Android security patch.

The firmware version for the update is A525FXXU1AUD2 and is 415.53MB in size. It is recommended that the Samsung Galaxy A52 is updated while connected to a strong Wi-Fi connection and is put on charge. As mentioned, it is currently rolling out in Indonesia but is expected to be rolled out in other regions soon. If for some reason the update doesn’t reach your device, you can head to Settings > Software update > Download and install to manually check for the update. 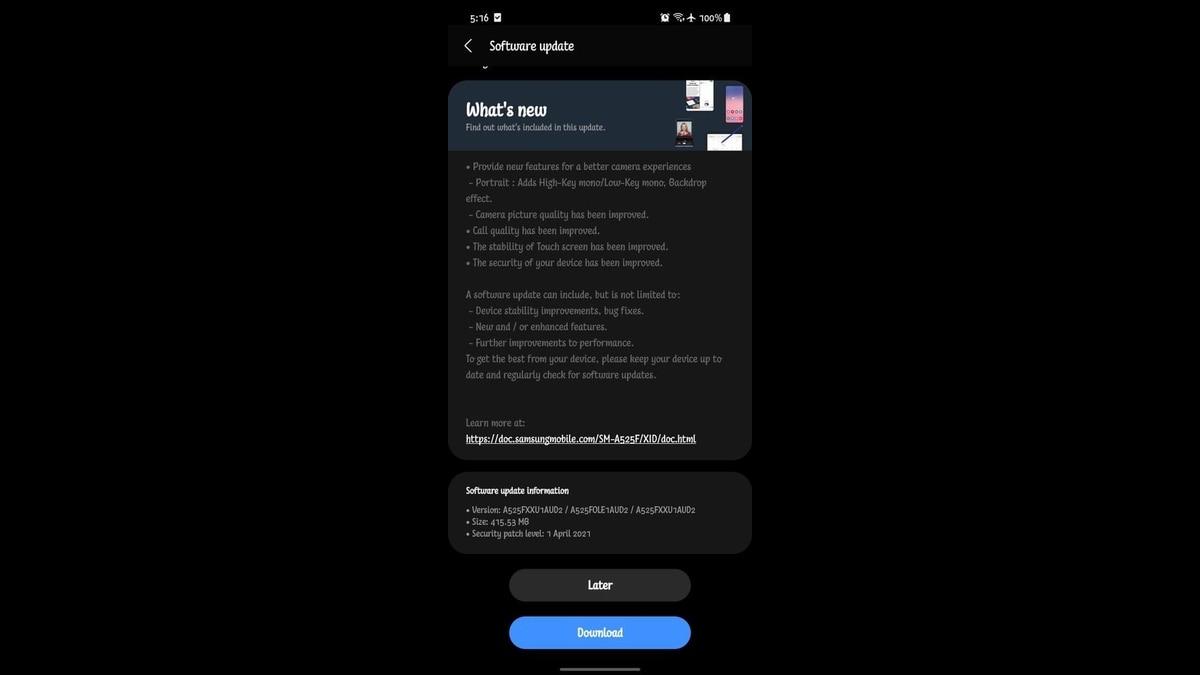 Samsung launched the Galaxy A52 in March 2021. It sports a 6.5-inch full-HD+ Super AMOLED Infinity-O Display with 90Hz refresh rate. It is powered by a Snapdragon 720G SoC paired with up to 6GB of RAM and 128GB of onboard storage, expandable to 1TB using a microSD card. It features a quad rear camera setup with a 64-megapixel primary sensor with an f/1.8 lens, a 12-megapixel secondary sensor with an f/2.2 ultra-wide-angle lens, a 5-megapixel depth sensor, and a 5-megapixel sensor with a macro lens. It has a 32-megapixel camera for selfies and video calls. It packs a 4,500mAh battery that supports 25W fast charging.

Is Samsung Galaxy F62 the best phone under Rs. 25,000? We discussed this on Orbital, the Gadgets 360 podcast. Orbital is available on Apple Podcasts, Google Podcasts, Spotify, and wherever you get your podcasts.