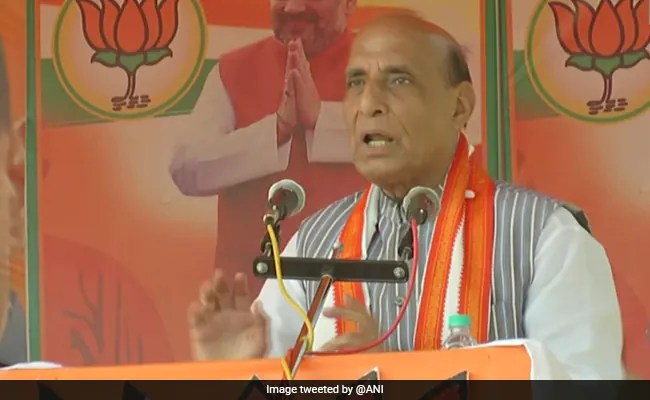 Union minister Rajnath Singh today said that Kerala government’s decision to launch a judicial investigation against Central agencies, including the Enforcement Directorate, is nothing short of a challenge to the federal structure of the country.

Speaking in state capital Thiruvananthapuram ahead of the coming elections, Mr Singh sharply criticised the Left-led government headed by Pinarayi Vijayan, which made the decision at a cabinet meeting on Friday.

Sources said the government was of the view that the agency had “derailed” the investigation in the gold smuggling and dollar cases. The state Crime Branch has already registered a First Information Report against some officials of the Enforcement Directorate.

It was decided to appoint Justice (Retd) KV Mohan to head the commission, sources said. But the government is awaiting clearance from the Election Commission as the model Code of Conduct s in place in the state, where assembly elections are being held.

“Kerala Cabinet has taken a decision to hold judicial inquiry against central agencies probing the gold smuggling scam. It means that Kerala government is challenging the federal structure of the Constitution,” Rajnath Singh said at an election rally today.

Senior CPM leader Sitaram Yechury was quick to hit back.

“That’s why I requested him to re-read the Constitution. What the central government is doing in Kerala is violative of central principles. Gross violation. That’s why it merits judicial examination,” he added.

The state Crime Branch had earlier filed a case against officials of the Enforcement Directorate for allegedly forcing Swapna Suresh – prime accused in theb gold smuggling case — to give statements against Chief Minister Pinarayi Vijayan.

The state BJP has scoffed at the government’s unprecedented step.

“Cases are coming against Pinarayi Vijayan, so he is trying to block it. He’s trying to sabotage probe. He is not Idi Amin, he can’t go beyond Constitution,” the Kerala BJP chief has said.

Mercedes-Benz To Purchase Electricity From Renewable Energy Sources From 2022