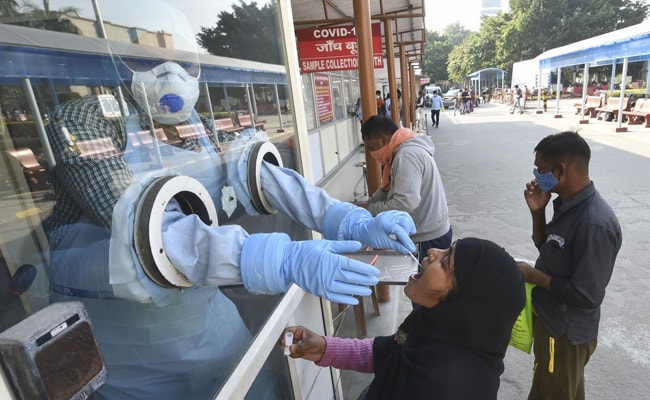 At a time when cabinet ministers of the Central government are being criticized for focusing on elections and not paying attention to the dwindling health infrastructure in their respective constituencies, Defence Minister Rajnath Singh has directed Defence Research and Development Organisation or DRDO to reopen the Sardar Vallabh Bhai Patel Covid care hospital in Delhi. He has also asked the defence body to set up a new facility in Lucknow.

“In view of the continuous surge in the number of Covid patients in Delhi, a full-fledged temporary Covid-care facility with 500 beds is being developed by DRDO for the public,” a senior Defence Ministry official told NDTV.

According to him, a similar facility is being set up in Lucknow – the parliamentary constituency of Mr Singh as Covid numbers are going up there also drastically.

“These health facilities would be run by Armed Forces Medical Services personnel, which include doctors, nurses and support staff,” he adds.

Uttar Pradesh has reported a growth rate of 19.25% in daily new cases. 46 districts in Uttar Pradesh have crossed their reported highest cases in the last 30 days. Lucknow, Kanpur, Varanasi and Prayagraj are the worst-affected districts.

The Centre is concerned with the fact that testing in the state is decreasing because of the collapsing health infrastructure. Per government data, from March 17-March 23, as many as 48 per cent RT-PCR tests were done. But these numbers came down last week – the gold standard RT-PCR tests decreased to percent while the antigen tests increased to 53 per cent (from 51 per cent).

Also, Delhi has been reporting more than 10,000 cases now for a week, and people have been complaining about delays in testing and also availability of hospital beds.

“In both these cities, fully functional hospitals are being established. There will be separate blocks for patients, doctors and duty accommodation for the medical team, an administrative block with a doctor’s room, area catering for visitors/attendants and a reception, a basic lab and pharmacy also,” states a senior MoD official.

According to him, both facilities will be secured with security staff, closed-circuit television (CCTV) surveillance and access control systems. The hospital is equipped with an integrated fire safety and control system. “Environmental safety and waste disposal processes have been built into the design of operations,” he adds.

“Situation in both states is very alarming. That’s why, these were reviewed on priority. Both are also reporting a very high number of daily new COVID-19 cases and high deaths caused by COVID-19,” a senior official said.

In the meeting, states were advised to increase the number of isolation beds, oxygen beds, ventilators/ICU beds, ambulance fleet as per requirement.

“In order to ramp up infrastructure, states were also advised to make use of the hospitals of Union Ministries and PSUs for treating COVID-19 patients,” he adds.

“An augmented health workforce would be needed in the coming days for contact tracing and house-to-house surveys for the symptomatic patients. The states were advised deployment of volunteers of NSS, NYK, women Self Help Groups (SHGs), and hiring retired doctors/paramedics etc., on contracts under NHM funds,” explains an official.

The waiting time is over for the new SUV to compete with the Fortuner, know the Price and Features
1 hour ago