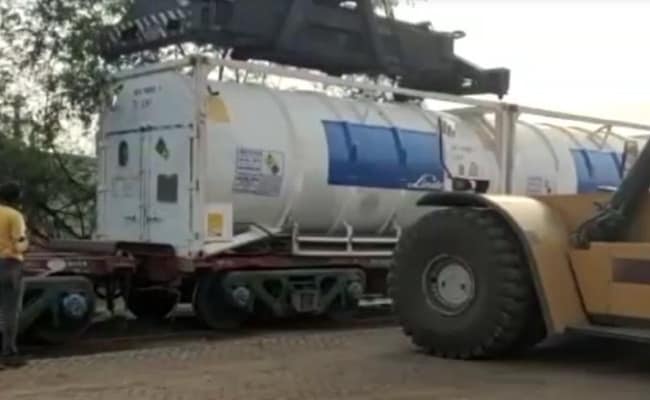 Oxygen Expresses have delivered more than 17,945 tonnes of oxygen since it started operations. (File)

Beating inclement weather conditions, 12 Oxygen Express trains carried 969 tonnes of liquid medical oxygen to six states and a union territory in a span of 24 hours, the Railways said on Wednesday.

While three such trains reached Tamil Nadu, four arrived in Andhra Pradesh, and one each in Delhi, Madhya Pradesh, Uttar Pradesh, Assam and Kerala.

The transporter said it procured the liquid medical oxygen for these states from Odisha, West Bengal and Jharkhand.

The country’s major liquid medical oxygen (LMO) generation plants are based in this region, and they are now providing the life-saving gas to the states facing a crisis due to the COVID-19 pandemic.

The Railways had rushed the Oxygen Express trains to their destinations in anticipation of bad weather conditions due to Cyclone Yaas, which pounded the beach towns in north Odisha and neighbouring West Bengal, hitting the coast around 9 am on Wednesday with a wind speed of 130-140 kmph.

The location of its landfall was north of Dhamra in Odisha’s Bhadrak district and 50 km south of Balasore, close to Bahanaga block, on the coast, officials said.

Oxygen Expresses have delivered more than 17,945 tonnes of LMO since it started operations a month back.

Jharkhand has become the 15th state in the country to avail the service.

So far, 272 Oxygen Express trains with 1,080 tankers have completed their journey.

Criss-crossing the country, the Indian Railways is picking up oxygen from places like Hapa, Baroda, and Mundra in the west and Rourkela, Durgapur, Tatanagar, and Angul in the east.