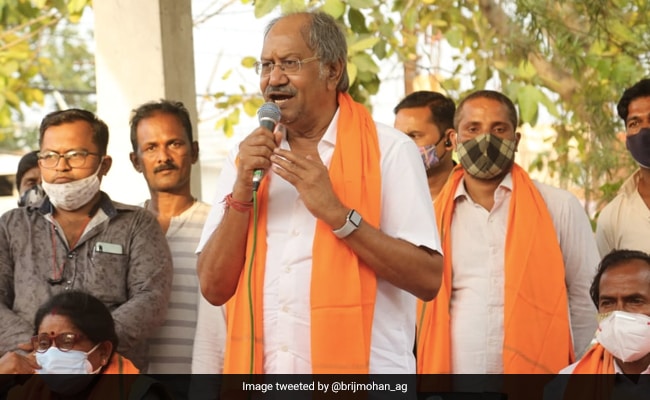 BJP MLA in Chhattisgarh and former state minister Brijmohan Agrawal has stoked a controversy as he said that those who call inflation a national calamity should stop eating food and using petrol.

The Congress, which is in power in the state, termed his statement “shameful” and said the day is not far when the saffron party will ask those who oppose the BJP-led centre to leave the country.

Talking to reporters on Thursday, Agrawal said, “If the inflation is a national calamity, then I think those who are calling it so should stop eating and drinking. They should quit food and stop using petrol.”

“I think if Congressmen and those who have voted for Congress will do so, the inflation would automatically come down,” he said.

A video of the MLA making the statement was widely circulated on social media platforms.

When contacted, Mr Agrawal said on Friday, “While interacting with reporters, I satirically made a statement that if Congressmen stop eating and using petrol, inflation would decline as the state Congress chief had termed inflation as a national calamity.”

He said he made the statement in a lighter vein while speaking to reporters after the press meet and it was not his intention to ask anyone to stop having food or using petrol.

Slamming him over the statement, Chhattisgarh Congress’s communication wing in-charge Shailesh Nitin Trivedi said the BJP can’t even realise the pain of people who are bearing the brunt of the price rise.

“Making such a vague statement is very shameful. They will later say that those who oppose the centre should quit India,” he said.

On Saturday, Congress leaders and workers will stage a state-wide protest in front of their houses against the centre over the issue of price hike.