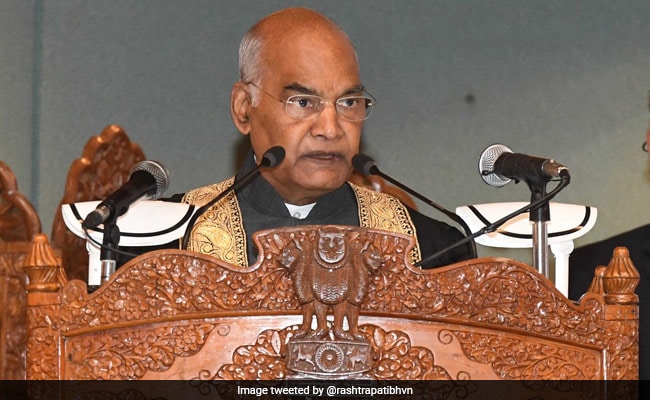 “Mei sapaz khushi tuhi meelith (I feel happy to meet you all) ” – that is how President Ram Nath Kovind started his speech on the convocation ceremony of the University of Kashmir in Srinagar on Tuesday, as he famous that Kashmir’s religious and cultural affect has an imprint all throughout India.

Immediately after greeting the dignitaries current on the SKICC auditorium overlooking the well-known Dal Lake, the president mentioned, “May I speak a few words in Kashmiri.

“Mei sapaz khushi tuhi meelith (I really feel pleased to satisfy you all),” President Kovind said with a smile, drawing applause from the audience, including students.

President Kovind said almost all religions that came to Kashmir embraced the unique feature of “Kashmiriyat” that shunned orthodoxy and encouraged tolerance and mutual acceptance among communities.

“I take this chance to induce upon the youthful era of Kashmir to be taught from their wealthy legacy. They have each cause to know that Kashmir has at all times been a beacon of hope for the remainder of India. Its religious and cultural affect has left an imprint all throughout India,” he added.

The president expressed confidence that the youngsters and the women of Kashmir will use democracy to build a peaceful and prosperous future.

Several prime ministers over the years have spoken Kashmiri words in their speeches to connect with the locals.

In February 2019, Prime Minister Narendra Modi took the audience at SKICC by surprise when he spoke in Kashmiri.

“Yeth teeri gatkaras manz chus bae mohabbat-uk alaaw zalni aamut (In this bone-chilling chilly of Kashmir, I’ve come to gentle the lamp of affection,” PM Modi had said in Kashmiri at an event.

In April 2003, at a rally in Srinagar, former prime minister Atal Bihari Vajpayee received thunderous applause from the crowd when he recited a famous couplet from Kashmiri Poet Mehjoor.