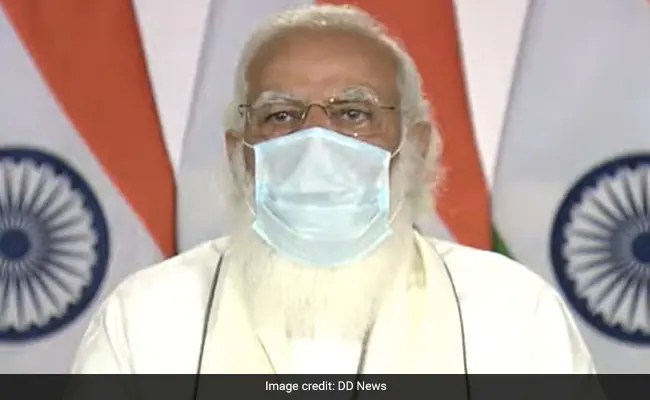 Prime Minister Narendra Modi, interacting today with the Chief Ministers of 10 states suffering the worst of the nationwide Covid spiral, interrupted Arvind Kejriwal to object to the discussion being televised by his office.

“My belief is that if there is a national plan against Covid then the centre and all state governments can work together in that direction. Our departed souls…,” Mr Kejriwal said, but stopped as PM Modi cut in.

“What is happening… this is strictly against our tradition, our protocol… that some Chief Minister is showing a live telecast of an in-house meeting,” said the Prime Minister sternly.

“This is not appropriate, we should always maintain restraint,” he chided the Delhi Chief Minister, who then apologized.

Mr Kejriwal replied: “Ok sir, we will be careful in future.”

He resumed his earlier thread before expressing regret once more.

“Our departed souls, those who have died because of corona, may their families get the strength to bear it. If there was any mistake on my part, I have said anything harsh or if there is anything wrong in my conduct, then I apologise. We will follow instructions given to us,” Mr Kejriwal said.

Government sources said the interaction was not meant to be televised and accused Mr Kejriwal of “descending to a new low” by doing so.

“For the first time, private conversations of PM’s meeting with Chief Ministers is being televised. His entire speech was not meant for any solution but for playing politics and evading responsibility,” said the sources.

The Chief Minister’s office later put out a statement: “Today, the Chief Minister’s address was shared live because there has never been any instruction, written or verbal, from the central government that the said interaction could not be shared live. There have been multiple occasions of similar interactions where matters of public importance which had no confidential information were shared live. However, if any inconvenience was caused we highly regret that.”

Covid Patient's Body Allegedly Not Given To Family, Falls Off Ambulance