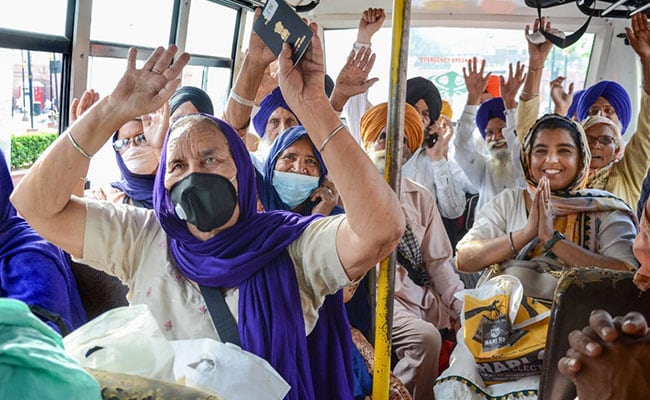 ‘Yatrees’ were served with langar (food) as per Sikh tradition at the Wagah border.

Over 800 Indian Sikhs arrived in Pakistan’s Lahore on Monday to attend the 10-day harvest festival of ‘Vaisakhi‘ at a 16th Century gurudwara in Punjab province, among other historically important shrines in the country.

Also known as ‘Baisakhi‘, ‘Vaisakhi‘ is a spring season harvest festival for Sikhs and Hindus. It marks the Sikh new year and commemorates the formation of Khalsa panth (saint-warriors) under Guru Gobind Singh in 1699.

Officials of the Evacuee Trust Property Board (ETPB) and the Sikh Gurdwara Parbhandhik Committee greeted the pilgrims at the Wagah border.

The EPTB is a statutory board that manages religious properties and shrines of Hindus and Sikhs who had migrated to India following the partition.

He said the ‘yatrees‘ were served with langar (food) as per Sikh tradition at the Wagah border.

Gurdwara Panja Sahib in Hassan Abdal, about 350 km from Punjab province capital Lahore, is believed to have the handprint of founder of Sikhism, Guru Nanak.

After necessary immigration clearance, they were taken to Gurdwara Panja Sahib, Hassan Abdal by bus. Main function will be held at Panja Sahib on April 14. They will be taken to all important and historical Gurdwaras in Pakistan during their 10-day stay and will return to India on April 22, Hashmi said.

The Pakistan High Commission in New Delhi had issued visas to over 1,100 Sikh pilgrims in connection with the ‘Vaisakhi‘ festival.

Under the framework of the Pakistan-India Protocol on Visits to Religious Shrines of 1974, a large number of pilgrims from India visit Pakistan to observe various religious festivals and occasions each year.