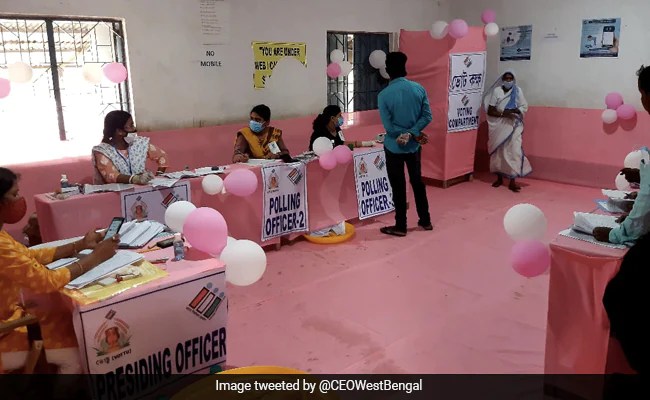 Over 79% Voter Turnout Recorded Till 5 PM In Phase 6 Of Bengal Polls.

The sixth phase of the West Bengal assembly election held on Thursday for 43 seats recorded a voter turnout of 79.09 per cent till 5 pm, the Election Commission (EC) said.

A total of 7,466 out of the 14,480 polling stations across the constituencies were monitored live through webcasting, even as drones were used to keep a watch over the vote proceedings, the EC said in a statement.

During the ongoing elections in West Bengal, a record seizure of Rs 316.47 crore has already been reported till Thursday.

It includes seizure of cash, liquor, narcotics, freebies, and it is over seven times the total seizure of Rs 44.33 crore made in the 2016 assembly polls, the statement said.

A total of 14,480 Ballot Units (BUs), and as many Control Units (CUs) and VVPATs were used during this phase.

“Non-functioning rate of EVMs and VVPATs during the poll is comparable to what was experienced in the last few polls,” the statement said.

A CU, at least one BU and a VVPAT makes for one EVM.

Porsche Teases The All-Electric Macan; Launch In 2023
18 mins ago

Chip Shortage to Cost Automakers $110 Billion in Revenues in 2021: AlixPartners
20 mins ago

Chip Shortage to Cost Automakers $110 Billion in Revenues in 2021: AlixPartners