Coronavirus: A woman hides behind a drum to dodge COVID-19 vaccinators in UP’s Etawah

A video from Uttar Pradesh’s Etawah district that shows an elderly woman hiding behind a drum to dodge a team of COVID-19 vaccinators has been shared widely on social media, underscoring the big challenge of quick inoculation in India’s most populous state.

BJP MLA Sarita Bhadauria and a Health Department team went to Chandanpur village for a vaccination and awareness drive on Tuesday. When they reached a house in the village, they managed to meet a few people but Har Devi, in her 80s, first hid behind a door and then ran behind a large drum in the house to dodge the team of health workers and the MLA.

In visuals, the woman is seen crouched behind a drum inside a dark room.

“The vaccination people have come. Where are you, amma?” someone is heard saying in the video.

But the woman refused to move.

“The MLA is here. Please come out,” one of the health workers said.

A doctor then approaches the woman and coaxes her to come out. “I am a doctor. I am not here to give you an injection. We are here just to speak with you. At least come and listen to your MLA,” the doctor said. 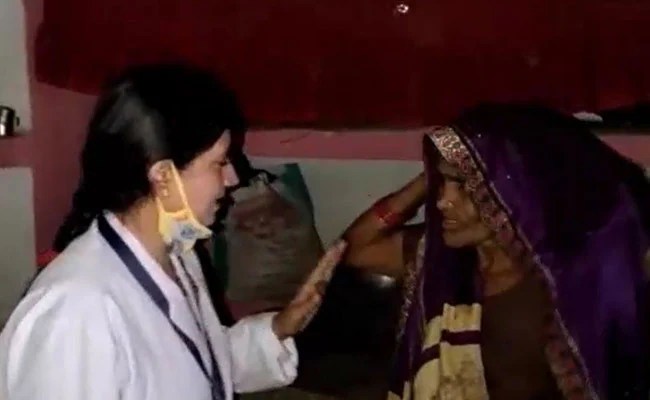 Eventually, the woman who was hiding behind the drum walks out and meets the MLA.

Reports from the village say the woman was not vaccinated that day, though others in the village got inoculated.

“People are a little unaware in the villages. Many officials were with me, and we were encouraging people to get vaccinated. The woman was first at the door, but on seeing us she ran and hid behind a drum. She was scared,” Ms Bhadauria said in an interview later that evening.

“She said she had been told she would get high fever and other bad things would happen. I think there is a crying need to have awareness campaigns in villagers,” the MLA told reporters.

US Sets and Suspends 25 Percent Tariffs on India, 5 Other Countries Over Digital Taxes