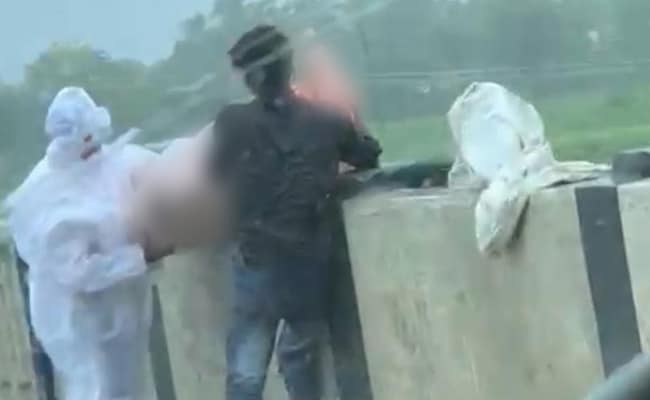 During a hearing on the centre’s oft-criticised vaccination policy, Supreme Court Justices DY Chandrachud and L Nageswara Rao on Monday referred to visuals aired by NDTV of a dead body – a suspected COVID-19 patient – being dumped into a river in Uttar Pradesh.

Justice Chandrachud and Justice Rao referred to that horrific sight as part of a sarcastic exchange to underline their displeasure at the many sedition cases filed recently, including one by the Andhra Pradesh government against two news channels for airing the comments of a rebel MP.

“Yesterday we saw pictures of a dead body being thrown in a river,” Justice Rao observed.

“Yes. There was a picture of body being thrown into river. I do not know whether complaint of sedition (has been) filed against the news channel for showing it,” Justice Chandrachud replied.

The exchange came hours before a bench including the same two judges put on hold Andhra Pradesh’s action against the two TV channels, and said: “It’s time we define limits of sedition.”

“The Andhra Pradesh government’s act of filing sedition cases against the channels is muffling channels. It is time the court defines sedition,” Justice Chandrachud said in that hearing.

The court also said: “We are of the view that provisions of 124A and 153 of the IPC (Indian Penal Code) require interpretation, particularly on the issue of rights of press and free speech.”

Section 124 A deals with sedition and 153 with provocation for riots.

In March the court, while dismissing a petition against Jammu and Kashmir MP Farooq Abdullah, said expressing views that are different from government opinion cannot be termed “sedition”.

That was in response to a petition claiming Mr Abdullah had sought the help of China and Pakistan against India on the Article 370 issue. The petitioners were also fined Rs 50,000.

On May 1 the court sought the centre’s response to a PIL challenging the validity of the sedition law.

The PIL was filed by two journalists, Kishorechandra Wangkhemcha from Manipur and Kanhaiya Lal Shukla from Chhattisgarh, who said the provision violated the freedom of speech and expression.

The journalists alleged frequent misuse, misapplication and abuse (of the law) since 1962.

The petition also pointed out that sedition as a crime had been repealed in other post-colonial democracies, and condemned as undemocratic, undesirable and unnecessary.

Criticism of the sedition law – which activists say is used by the government to muzzle dissent and opposing views – is a long-standing point of concern in the country.

In December last year former Supreme Court judge Madan B Lokur said the sedition law was being misused to curb free press and speech. He said “a lethal cocktail of use and misuse of law” was being used to adversely impact the liberty of those who spoke up against the government.