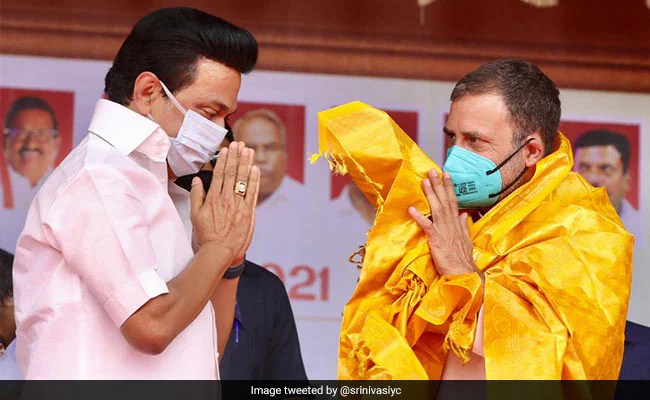 DMK president M K Stalin on Sunday requested Congress leader Rahul Gandhi to stitch an alliance against the BJP at the national level, like the combine led by his party in Tamil Nadu and accused the Centre of unleashing a ”chemical” and ”cultural” attack against the state.

Addressing a public meeting in Salem for the April 6 Assembly polls, MK Stalin alleged India was “suffocating due to the communal, fascist” forces and Mr Gandhi had a big responsibility to protect the nation against it.

The rally in Salem was the first in which leaders of all the constituents of the DMK-led Secular Progressive Alliance took part and it includes Congress party’s Rahul Gandhi.

The ruling AIADMK is facing the polls in alliance with the Pattali Makkal Katchi, the BJP, the former union minister GK Vaasan led Tamil Maanila Congress (Moopanar) and other smaller parties.

The BJP could not win even a single Lok Sabha seat from Tamil Nadu in the 2019 Parliamentary polls as secular parties, led by the DMK came together, he said.

Also, the ensuing Assembly polls would be a ”washout” for the BJP in Tamil Nadu in view of his party led Secular Progressive Alliance, he claimed and cited opinion polls that favoured his party-led combine.

Mr Stalin said the BJP got only a 37 per cent vote share in the Lok Sabha polls in 2019, which meant that the remainder, 63 per cent of people opposed it, but they voted for different parties.

There was no coalition at the national level -similar to the one in Tamil Nadu- against the saffron party in the last Lok Sabha polls, he said.

Hence, Rahul Gandhi should take the responsibility to stitch an alliance against the BJP at the national level. The Congress leader should take efforts immediately towards building such an alliance, he added.

Addressing Rahul Gandhi as brother, Mr Stalin said the Congress MP had told him not to address him as ”sir.”

Citing Hydrocarbon, Methane extraction projects besides others, Mr Stalin said such initiatives were a ”chemical attack” by the Centre on Tamil Nadu.

Kudankulam nuclear power project, the Chennai-Salem Express Highway and the Neutrino Observatory project were the other initiatives he mentioned to claim the ”chemical” assault.

Only the DMK could stand up to such attacks and AIADMKhas proved by its conduct over the past five years that it cannot take on the Centre, he alleged.

As the BJP could not get a foothold in Tamil Nadu, it was trying to gain space by intimidating the AIADMK, he alleged.

The DMK chief also accused the BJP of hatching a conspiracy ”in all the matters” following late AIADMK supremo Ms Jayalalithaa’s death in 2016.

MK Stalin, also for the first time accused the Centre of not taking any initiative to support the burial of late DMK patriarch M Karunanidhi in the Marina beachfront in Chennai.

Karunanidhi’s death in 2018. When they sought to know if he needed any assistance, he conveyed to them that the DMK had petitioned the AIADMK-led

Tamil Nadu government to allot space in Marina to bury their beloved leader and sought support.

The Tamil Nadu government ”did not give permission,” the Centre did not take any initiative and Modi too did not give a thought to it, he claimed.

Karunanidhi died on August 7, 2018 and he was buried in Marina after the matter went to the Madras High Court.

The election was not about a mere regime change but for redeeming self-respect and reclaim lost rights, he said.

Both Chief Minister K Palaniswami and Deputy Chief Minister O Panneerselvam were not ”concerned” about the people and they eyed only making money through ”corruption” and were ”subservient” to the Centre and BJP, he alleged.