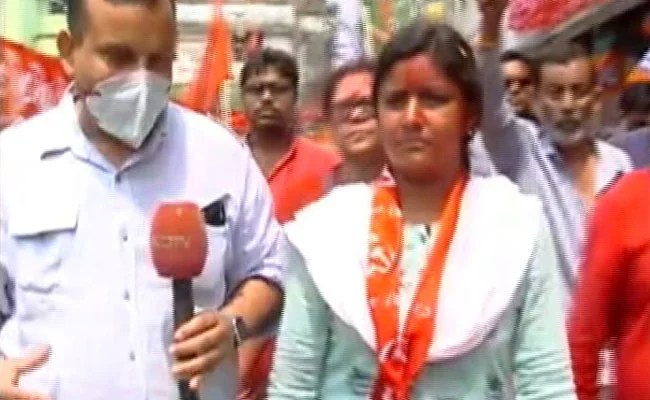 Amid an intense Trinamool Congress vs BJP battle in Bengal’s Nandigram, the war cries of the two parties, “Khela Hobe (game is on)” and “Jai Shri Ram“, have caught on with the voters. But the Left’s candidate from the constituency, Minakshi Mukherjee, has only one pitch – employment – and is confident that she will emerge as a tough competitor for her two heavyweight adversaries – Mamata Banerjee and Suvendu Adhikari.

Minakshi Mukherjee, 36, does not have the kind of resources that are at the disposal of Suvendu Adhikari or Mamata Banerjee. But she is resilient as she covers her constituency barefoot and sometimes in an open auto.

“We don’t have dhan bal (money power) but we have jan bal (the backing of the people). This fight is between the common people and those who have only looted the state. If you want the people to win, you will have to give employment, respect women, and farmers should get the price they command for their produce,” she said while speaking to NDTV.

When asked if she stands a chance this election, Ms Mukherjee said, “Those who did nothing for the state in the last few years are contesting from Nandigram. The youth needs jobs, better opportunities. But the leaders did nothing. We are fighting this election on real issues and not on religious polarisation.”

“If the Election Commission and the police force discharge their responsibilities well, then the BJP and Trinamool will not get votes in Nandigram,” she said.

“Why are people looking at this election as the a fight between Suvendu Adhikari and Mamata Banerjee?” the young contestant asked, adding, “In 17 panchayats of Nandigram, most don’t have proper houses. See, we have public at one side vs Team A and Team B who have looted the public. People who cheated the people of Nandigram for 10 years are now in BJP and Mamata Banerjee is calling up leaders of BJP and saying, ‘vote for me’. We are fighting a combined unit.”

Nandigram is home to 17 gram panchayats and the Left has reportedly had near-zero presence in almost 12 of them. This high-stakes constituency was with the Left Front until the TMC snatched it away in 2011 as it came to power in the state with its promise of paribartan (change).

In the 2016 Assembly election, Suvendu Adhikari had won the seat on a Trinamool ticket.

The eight-phased voting for the 294-member Bengal Assembly is currently underway in the state with the first phase registering an over 80% voter turnout on March 27.