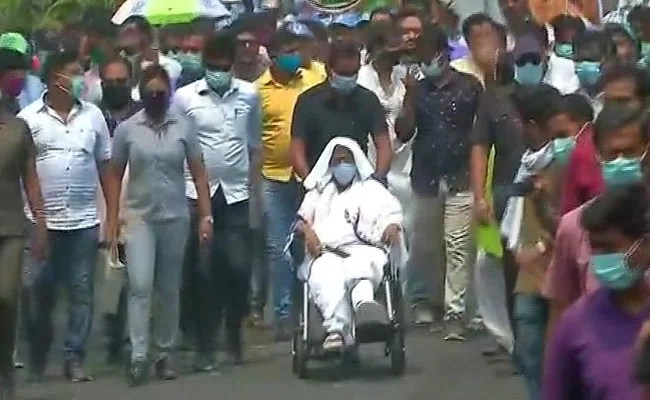 In the midst of nationwide Holi celebrations, Mamata Banerjee – injured earlier this month – held a roadshow in Bengal in high-stakes Nandigram, which votes in the second phase of the state elections.

Nandigram will see a high-profile battle between Ms Banerjee and her former aide Suvendu Adhikari, now with the BJP, on Thursday. The Trinamool Congress chief’s roadshow comes before campaigning ends in the constituency.

In a video posted by the Trinamool Congress on Facebook, the West Bengal Chief Minister, in wheelchair, was seen greeting crowds with folded hands as party workers – carrying flags – accompanied her.

Earlier this month, the 66-year-old Trinamool Congress chief was injured; she she was pushed by four or five people against her car and had the door shut on her at a time when there was no police personnel around her.

Amid accusations by the ruling party and scathing counter-attacks by the BJP, which is trying to claim victory for the first time in the state, the Election Commission suspended the police officer who was in charge of the Chief Minister’s Security.

Exclusive: Here’s how to maintain a healthy diet on Holi 2021! | Culture News

From Today, A Move To Revolutionise How Middle East Oil Is Sold

Mamata Banerjee Slams BJP At Rally, Says “You Brought Covid And Ran Away”
22 mins ago

Rahul Gandhi Takes On BJP, Trinamool In Bengal
39 mins ago

Noida Residents Spot Bag In Drain From Delhi, Cops Open To Find Man’s Body In It: Report
40 mins ago