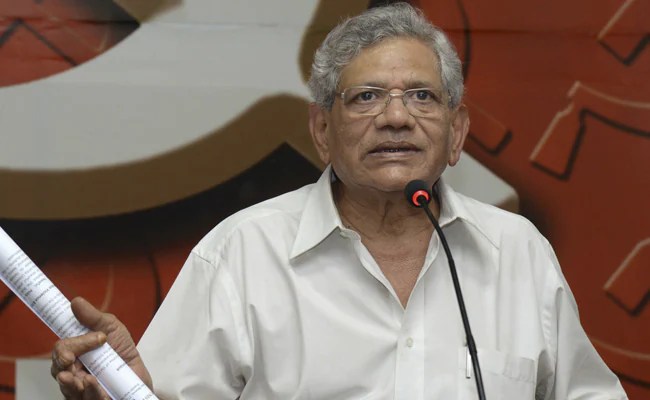 Mr Yechury, who reached Kerala to campaign for the Left parties, said the EC’s move amounts to “denial of representation” to Kerala in the Council of States.

The EC had recently decided to put the elections to three Rajya Sabha seats on hold after the Centre flagged some issues.

Targetting the BJP-led NDA government at the Centre, he said it is known for “misusing” central agencies and in Kerala they are being used “unscrupulously and in a targeted manner”.

On Defence Minister Rajnath Singh’s comments about the Kerala government’s decision to recommend a judicial inquiry against the ED, Mr Yechury said the honourable union minister must re-read the Constitution.

“The honourable defence minister must reread the Constitution. No central agency can interfere or work in any state without the concurrence of the state concerned. And if the state concerned is not willing to give concern, they approachthe judiciary,” he said.

Attacking the Congress, he said the national party wants to raise more Hindutva slogans than the BJP-RSS leaders and was feeding communal polarisation.

“Now there is hindutva competitiveness between them (Congress and BJP).. it’s only feeding hindutva communal polarisation. It’s for them to answer where they stand. The Left is now the principal target of the BJP, precisely because we are the only force uncompromising and without deviating from its position and standing up for secularism,” he added.

The CPI(M) General Secretary asserted that the Left wants the separation of religion or faith from politics and the government, which makes the communist party a principal target of the communal organisations.

“The Left defines secularism as the individual right of everyone to choose their faith or the right of everybody not to choose any faith at all. That choice is protected by the Constitution. We are committed to protecting it. The separation of religion or faith from politics and the government is the yardstick of secularism. That’s why we are the principal target of the communal organisations,” Mr Yechury said.

On the contentious Sabarimala issue, he said the matter was sub judice and other parties were raking it up because they have nothing else to discuss. “The most literate and politically conscious Kerala electorate knows that the issue is before the court and unless decided, is not an issue for discussion.”

“How is Sabarimala an issue and why would people accept that it is an issue and that they would succumb to the diversion? he asked.

“The matter is made out of nothing because the other parties do not have any issues pertaining to the people. They don’t have anything to say about the development of the state. It’s just used to divert the attention of the people,” he said.

Claiming that the LDF government in Kerala was probably the only state government, which has actually fulfilled the assurances given in the poll manifesto, the communist leader said it has fulfilled 580 out of 600 promises it made during the last assembly elections.

Expressing confidence that the CPI(M)-led government will retain power in Kerala, Mr Yechury said: “The BJP and Congress are only trying to create controversies..”

“The central government is known for misuse of the central probe agencies and in Kerala they are being used unscrupulously and in a targeted manner,” he said.

On the EC decision to keep on hold the RS election schedule for Kerala, Mr Yechury said the BJP wants to wait till the assembly elections were over, hoping that there will be a change in the composition of the assembly.

“Currently, the LDF will take two out of the three seats. In order to change that, this sort of maneuver is being used.”

Urging the Election Commission to be “objective and independent”, he said: “Keeping the Rajya Sabha election in abeyance was very bizarre and suspicious.”

He said the Kerala government performed well on all fronts in the last five years despite the unprecedented natural disasters in the state. He also alleged that the government also faced extreme hostility of the Centre, which provided only paltry assistance to the state.