Royal Challengers Bangalore thrashed Rajasthan Royals by 10 wickets to move on the top of the points table in the Indian Premier League (IPL) 2021. Chasing a moderate target of 178, young opener Devdutt Padikkal slammed a ton, while skipper Virat Kohli scored a fifty as RCB chased down the target in just 16.3 overs.

Rajasthan Royals were completely outclassed by the Bangalore openers in the second half of the game as their bowlers had no answers for the Padikkal-Kohli onslaught. Padikkal shared a 181-run stand alongside skipper Virat Kohli for the opening wicket to take his team to the victory in just 16.2 overs. The magnificent duo shared the highest partnership for the first cricket in Royal Challengers Bangalore history.

Padikkal remained unbeaten on 101 runs as he scored the fastest century by an uncapped player in IPL history – 51 balls. His innings was laced with 11 fours and six magnificent sixes. Kohli also scored fluent 72 runs off 47 balls as he was seen motivating Padikkal throughout the chase. The skipper hit 6 fours and 3 sixes.

Earlier, asked to bat first, Jos Buttler (8) and Manan Vohra (7) failed to give Rajasthan a good start. Siraj then unleashed a perfect toe-crusher for David Miller (0) as skipper Virat Kohli made a perfect call for DRS.

Captain Sanju Samson also threw away his wicket after another good start. He was dismissed by Washington Sundar on just 22 runs. Shivam Dube (46 off 32 balls) stemmed the rot in the middle and big hits from Tewatia (40 off 23 balls) helped Rajasthan score 177/9 in 20 overs. 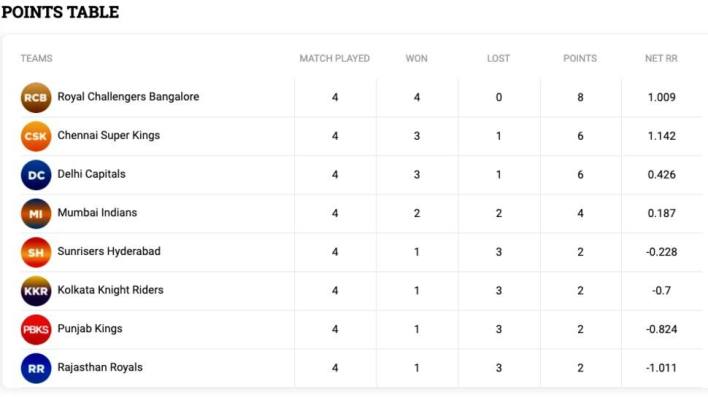 The comprehensive 10-wicket win over Rajasthan Royals helped Royal Challengers Bangalore to go top of the points table with four wins in as many matches at an NRR of +1.009. Chennai Super Kings are now slipped to the second spot with six points at a healthy +1.142 NRR. Last year finalist Delhi Capitals are third with six points while defending champions Mumbai Indians are fourth with 4 points.

The bottom four on the table have won just one match each as Sunrisers Hyderabad are fifth. While Kolkata Knight Riders, Punjab Kings and Rajasthan Royals acquired the last three spots respectively.

Shikhar Dhawan continues to don the orange cap as he has slammed 231 runs in four matches at an average of 57.75. Royal Challengers Bangalore all-rounder Glenn Maxwell is at the second in the list with 176 runs in four games. Jonny Bairstow, who slammed unbeaten 63 runs against Punjab Kings, is now at the third spot with 173 runs in four games.

CSK opener Faf du Plessis also jumped on the list with his unbeaten 95-run knock and are at the fourth spot with 164 runs. KKR’s Nitish Rana has also scored 164 runs is just behind Faf due to a lower average.

RCB’s death-over specialists Harshal Patel holds the purple cap with 12 wickets in four matches. Deepak Chahar with his four-wicket haul against KKR are now at the second spot with 8 wickets. Delhi Capitals’ Avesh Khan and MI’s Rahul Chahar has also claimed eight wickets each but are behind Deepak due to higher economy rate respectively. KKR’s Andre Russell is at the fifth spot with 7 wickets.

Moving Poems To Share On Mothers Day
22 mins ago