Mumbai Indians star Jasprit Bumrah’s wife Sanjana Ganesan was back in the studio as the sports anchor recorded a show for the Indian Premier League broadcasters ahead of the IPL 2021 game between Kolkata Knight Riders vs Mumbai Indians match on Tuesday (April 13).

Sanjana put an Instagram story in which she can be seen with cricketing legends Brian Lara and Brett Lee. The former model wrote ‘fun day at work’ in the story.

Here’s the pic of the story: 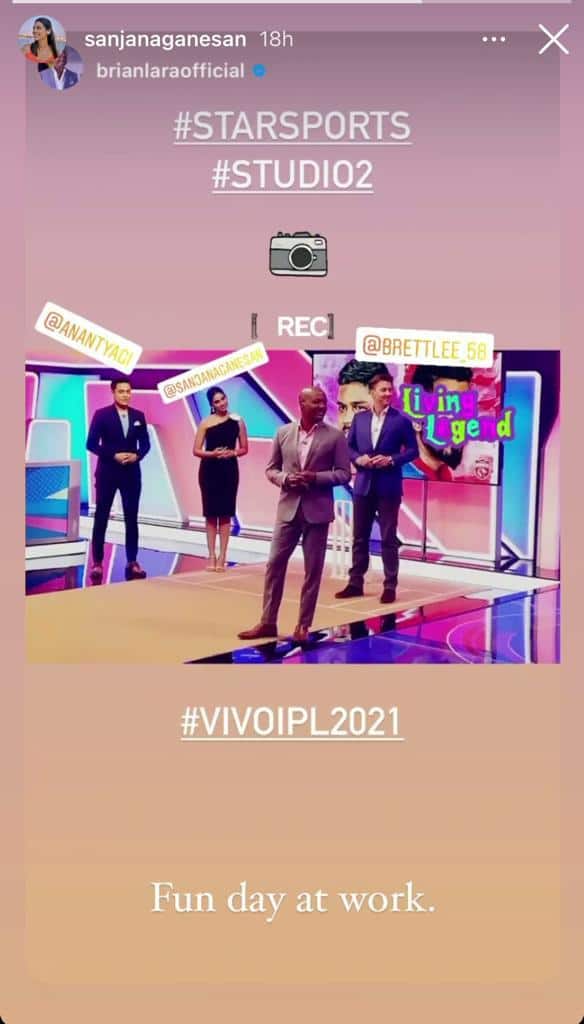 Meanwhile, Sanjana’s newly-wed husband Bumrah will be seen in action on Tuesday as his team MI lock horns with Kolkata Knight Riders in their second match of the IPL 2021 and the defending champions will aim to bounce back after losing their opener against Royal Challengers Bangalore.

MI’s power-packed middle and lower batting failed against some inspired and intelligent bowling from Harshal Patel. But their power-hitting unit comprising the Pandya brothers and Kieron Pollard among others batting are too good to fail as a whole twice in a row.

Containing them will be a big challenge for Kolkata Knight Riders who on Sunday scored a close but impressive win over SunRisers Hyderabad.

With their spin bowlers, who they relied on last season, not proving effective in Sunday’s game, MI’s batting could worry Eoin Morgan’s side.

Pat Cummins, who came in as second change, will again hold key for the KKR bowling unit.

An interesting contest will be between Nitish Rana, who top-scored for KKR with 80 (off 56 balls) against SunRisers’ strong bowling unit, and Jasprit Bumrah and Trent Boult.

While Boult is accurate, Bumrah’s pace and bounce can be hot to handle.

KKR will also like their new purchase, the seasoned Harbhajan Singh, bowl more than one over in the IPL 2021.