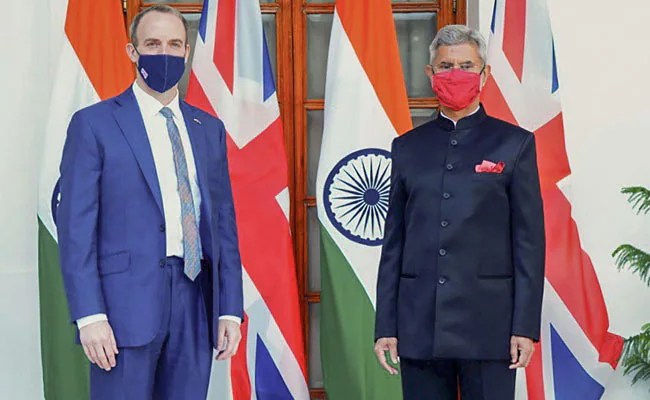 India and the UK are close to signing a “migration and mobility partnership”, which could see thousands more Indian students enrol at UK universities in exchange for illegal Indian migrants being sent back, according to a UK media report on Monday.

The partnership forms part of a wider set of agreements in the pipeline during the visit of External Affairs Minister S Jaishankar, invited by his UK counterpart Dominic Raab as a guest at the multilateral G7 Foreign and Development Ministers meeting this week.

A bilateral meeting between Mr Raab and Mr Jaishankar is scheduled for Thursday at Chevening in Kent, south-east England.

“London and New Delhi are on the cusp of signing a ‘migration and mobility partnership”, which is part of a wider move towards bolstering relations that aims at securing a mini trade deal later this year,” a report in “The Daily Telegraph” claims.

“Government insiders say the talks are still live and final details are yet to be ironed out, but the deal represents an important step on two key sticking points that have hampered bilateral relations in recent years. There are hopes that the agreement could be clinched as early as this week, when Subrahmanyam Jaishankar, India’s foreign minister, is in London for multilateral talks with the G7, hosted by Dominic Raab,” it notes.

The issue of illegal Indian migrants in the UK has long been on the agenda of bilateral negotiations, with both sides failing to agree on the numbers in question.

While the UK maintains around 1,00,000 Indians are illegally living in the country, India has questioned the veracity of those numbers in the past because that figure is believed to also cover nationals from other parts of the Indian subcontinent.

The two sides were close to signing an agreement on the issue in 2018 before it fell through over this ambiguity.

Under the current Boris Johnson led administration, a post-Brexit Indo-Pacific tilt of the UK has been linked with potential agreements across several previously sticky areas – including easing the route for student visas for Indians wanting to study at UK universities and easier access to legal services in India for British companies.

Prime Minister Narendra Modi is scheduled to hold a virtual summit with his British counterpart Boris Johnson on Tuesday, when both leaders are to sign off on Roadmap 2030, a blueprint expected to pave the way for a free trade agreement (FTA) in the future.

“A comprehensive Roadmap 2030 will be launched during the Summit, which will pave the way for further expanding and deepening India-UK cooperation over the next decade across five key areas, namely people-to-people relationship, trade and prosperity, defence and security, climate action and healthcare,” the Indian High Commission in London said in a statement.

“India and UK enjoy a Strategic Partnership since 2004. It has been marked by regular high-level exchanges and growing convergences in diverse areas. The summit will be an important opportunity to elevate our multi-faceted strategic ties and enhance cooperation on regional and global issues of mutual interest. Both leaders will also discuss COVID-19 cooperation and the global efforts to fight the pandemic,” the statement added.

Religious, Political Events Among Factors Behind Covid Spike In India: WHO
17 mins ago

Around 130 Ventilators Sent By Centre Faulty: Punjab Official
2 hours ago