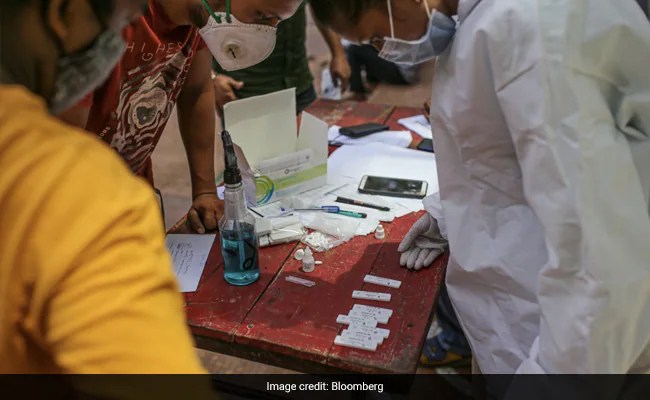 India’s failure to quickly examine Covid-19 samples for new variants risks hurting its battle against a record surge of infections, with scientists warning the delays could damage everything from vaccine efficacy to effective hospital treatments.

The South Asian nation has tested less than 1% of its positive samples, according to government data, compared to the U.K. which has sequenced 8% of infections, and 33% in the last week, the Covid-19 Genomics U.K. Consortium said. The U.S. last month reported it was sequencing about 4% of its 400,000 weekly new cases, the Centers for Disease Control and Prevention noted.

India reported more than 115,000 new daily infections on Wednesday, taking its tally of cases to 12.8 million, behind Brazil and the U.S. Its wealthiest state Maharashtra has emerged as the epicenter, forcing the government to halt all non-essential services, order private companies to work from home, and shut malls and restaurants through April. Other states have also imposed restrictions, though none as severe.

After new variants from the U.K. were discovered in several inbound passengers, India set up a consortium of 10 state-run laboratories to sequence positive tests samples in December. However, between January and March the country has only studied 11,064 of its samples, the Ministry of Health said at a briefing on March 30, which is less than 0.6% over that period.

The resurgence in cases could hurt nascent growth in Asia’s third-largest economy, which had slumped into a historic recession last year after Prime Minister Narendra Modi announced a strict nationwide lockdown. Genetic sequencing of test samples helps catch new variants quickly as the virus mutates, allowing countries to rework their virus strategies based on the new strains. But surveillance is patchy globally and scientists warn that dangerous mutations are probably spreading undetected.

India doesn’t have enough data on the new variants to explain the steep, nine-fold jump in infections from around 11,000 daily new cases in early February, said Bhramar Mukherjee, a professor at the School of Public Health at the University of Michigan.

“We are essentially reverse engineering to explain the features of the virus curve as we do not have credible data on variants of concern and genomic surveillance,” Mukherjee said. “The more you let the infection spread the more chances of the virus mutating.”

In India, 807 cases related to U.K. variants, 47 from the South African strain and one from the Brazilian form have been detected as of March 30, according to the Health Ministry, which has maintained the rise in new infections is not linked to new variants. Studies suggest some of these new strains are more contagious, with evidence pointing to one of them being more deadly and another driving reinfections.

A spokeswoman for the Ministry of Health did not respond to emailed requests for comment.

India has enough laboratory capacity for genome sequencing, but getting a wide spread of regular samples from across the country — including the rural hinterland and potential super-spreader events — has been a problem, said Rakesh Mishra, the director of the Centre for Cellular and Molecular Biology in Hyderabad, one of the labs working to sequence positive virus samples.

“We are not sequencing for the sake of numbers, we are sequencing in a meaningful way,” Mishra said. More needs to be done, he said, noting the government was mobilizing resources to get suitable samples from all regions.

As infections spiral, five states are in the middle of elections with thousands of voters thronging to campaign rallies, while the northern Uttarakhand is marking the month-long Hindu pilgrimage of the Kumbh Mela, which draws hundreds of thousands of people to the banks of the Ganges river.

It is this increased movement of people, along with the slow pace of vaccinations and slipping compliance with masking and social distancing that’s contributing to the new spike, said Rijo M. John, a Kerala-based economist and public health policy analyst who consults for the World Health Organization. “While the second wave so far has been less lethal, it is all set to be worse than the first wave.”

The word’s biggest vaccination drive, which began on Jan. 16, has failed to reach the government’s own target, dogged by an over dependency on technology and the absence of proactive measures to reduce vaccine hesitancy, John said.

India is vaccinating at an average rate of 2.6 million doses per day. At this pace, it will take another two years to cover 75% of its population. About 5% have received one dose and only about 0.8% have received the two shots required, according to the Bloomberg Vaccine Tracker.

People had dropped their guard after seeing those with mild Covid-19 cases recover, said Jayaprakash Muliyil, chairman of the Scientific Advisory Committee in the National Institute of Epidemiology.

“So the group of people who were very careful, who were taking utmost precautions, they suddenly changed behavior,” Muliyil said. “For three months there was this tantalizing fall in cases, and the average person believed it was gone.”

Modi, who on Sunday described the virus surge as “alarming,” is scheduled to meet state chief ministers on Thursday to discuss the brewing health crisis.

“It is much easier to roll out vaccination when the infection is not so high,” said Mukherjee. “Now the health care capacity is stretched between vaccination and Covid care.”

Delhi Night Curfew From 10pm to 5am: How to Get e-Pass for Travelling

Government Committed To Ensure Adequate Availability Of Vaccines; All Need To Work Together In COVID-19 Fight
42 mins ago

Not Surprising That China Operating In Indian Ocean: Navy Chief
1 hour ago

India In Touch With Pakistan
1 hour ago