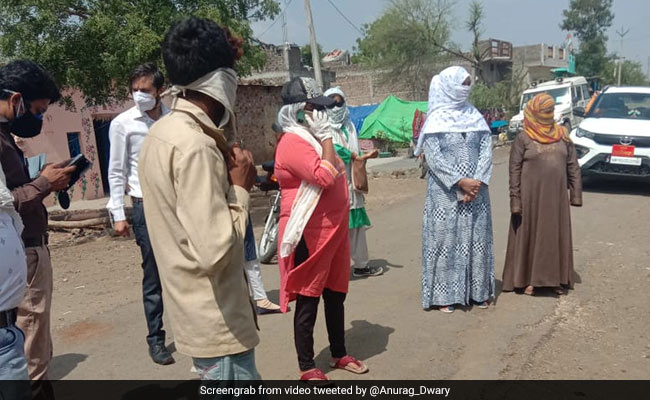 A team of health and administration officials led by a woman revenue official was attacked when they went to a village in Ujjain district of Madhya Pradesh on Monday for Covid vaccination. In Niwari, 350 km from state Bhopal, the villagers got into an argument with the district collector over the same issue. In Balaghat — 435 km from Bhopal — only two people got vaccinated at the two camps set up.

The rural areas of Madhya Pradesh have reported the lowest inoculation rate. Analysis of the daily vaccination data from the state’s 52 districts shows vaccination bookings mostly from urban areas. Indore, Bhopal, Jabalpur, Sagar and Gwalior are the top performers in terms of vaccination.

The predominantly rural districts — particularly the ones dominated by tribals including Agar-Malwa, Umaria, Harda, Alirajpur and Sheopur — are at the bottom.

Worst performers are rural districts and those with high tribal populations, One reason for low vaccinations officials say is extreme vaccine hesitancy in rural areas pic.twitter.com/khF83nri3j

Analysis of the best performers showed the state’s most populated district — Indore, with an estimated 33 lakh present population — had vaccinated 29 per cent of its population.

The rest includes state capital Bhopal. The city with an estimated population of 28 lakh had reported 26 per cent vaccination till May 24.

It was followed by Jabalpur — 21 per cent of the estimated 25-lakh population have been vaccinated.

Among the worst performers is Agar Malwa, where only 12 per cent of the 5 lakh people were vaccinated till May 24. In Umaria, with a population of 6 lakh, the corresponding figure is 11.

In Harda, 12 per cent of the 5.5 lakh people have been vaccinated. In Alirajpur, the figure is 9 per cent and in Sheopur 10 per cent.

The government blamed the Congress, accusing it of spreading vaccine hesitancy among the people.

Medical Education Minister Vishwas Sarang said, “There is some hesitancy and the Congress is responsible for this. We are carrying out a public awareness campaign so the public can get the benefits.