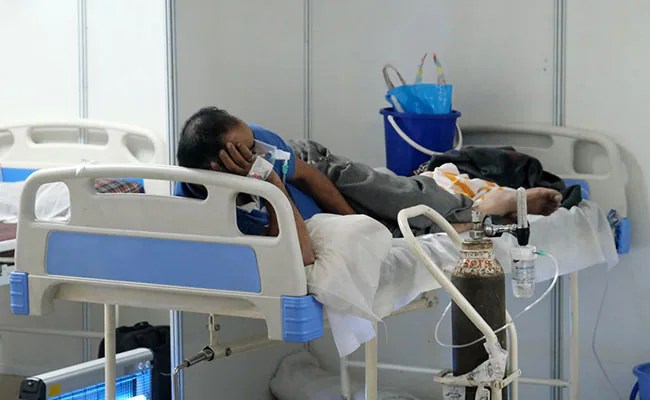 With over three lakh cases per day, hospitals across India are running out of beds and resources (File)

More than 10 days into Delhi’s oxygen crisis and it is still family members of patients who are desperately running around to arrange supply because the hospital is running short.

Dhruv’s brother is admitted to the Sehgal Neo Hospital in west Delhi, and he was forced to stand at an oxygen plant for 15 hours to get one cylinder for him.

There are 60 patients on oxygen support at this hospital, and it is just managing to scrape through.

The situation in the national capital is so grim that at the Sama Hospital in south Delhi, relatives have been today asked to sign forms that say they “will not hold the hospital responsible for any outcome, including death, of my patient that results from a shortage of oxygen”.

Section of the form read: “I understand Sama Hospital has no control over the supply of oxygen. I declare that I will in no way hold the hospital responsible for any outcome, including death…” 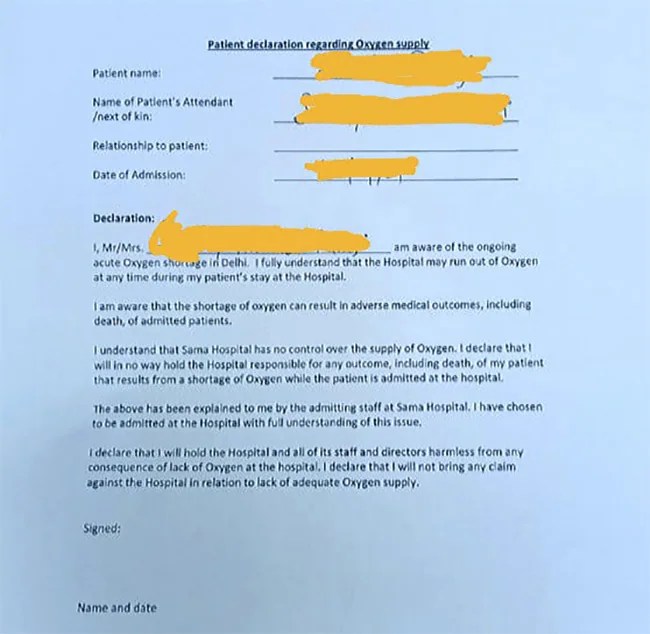 Delhi hospitals have been forced to seek waivers from patients’ families

There are 30 patients on oxygen support at Sama Hospital.

Dr Anusha Gudumula, the resident medical officer, told NDTV: “We were compelled to take this measure because despite our best efforts we are running low on oxygen. Patients who need three litres are being maintained on two.”

Over the past couple of days several facilities – Madhukar Rainbow Children’s Hospital, VIMHANS and Sitaram Bhartia Hospital – sent out SOS messages and received new supplies at the last minute.

There are 30 Covid-positive children at the Rainbow Children’s Hospital.

There are 45 patients, including newborns and post-partum mothers, on oxygen support at Sitaram Bhartia.

VIMHANS has 135 patients on oxygen support, including 40 who are on ventilator.

As it has repeatedly since this crisis exploded, the Delhi government today said it needed more oxygen than was being allotted by the centre. Till this shortfall – several hundred metric tonnes per day – will mean the lives of hundreds of people remain in peril.

Raghav Chadha, a MLA for the ruling Aam Aadmi Party, told NDTV: “All other states were allotted the oxygen they needed. Only Delhi has not been allotted the oxygen we need. Our need is 976 MT but we are receiving much lower (amounts)… over 300 metric tonnes.”

“Every hospital of Delhi only has oxygen for the next three to four hours. Until we get proper supply from the centre things will remain like this,” he warned.

The centre has been warned by the Supreme Court to ensure full supply of oxygen to Delhi by midnight today; this comes after a similar warning from the Delhi High Court.