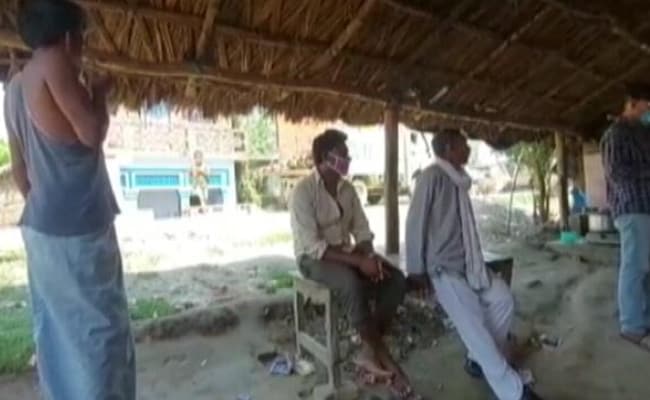 At the root of the vaccine hesitancy is rumours regarding the safety of the shots.

With vaccine hesitancy threatening to derail the Covid immunisation exercise in Maharashtra’s rural areas, local authorities have made several announcements to draw people to the booths.

A gram panchayat in Hingoli district has offered an insurance worth Rs 5 lakh to anyone who gets tested for Covid and takes vaccine shots. At Kalvan in Nashik district, MLA Nitin Pawar has announced a grant of Rs 15 lakh for gram panchayats that spread awareness and ensure 100 per cent vaccination.

Maharashtra may be at the top of the table when it comes to vaccination numbers in the country, but only 3.69 per cent of its 12 crore population has been fully vaccinated so far. Less than 3 per cent of the people in Hingoli, Palghar, Nandurbar, Parbhani, Jalgaon and Gadchiroli have received both doses.

At the root of the vaccine hesitancy in rural and tribal-dominated areas of the state is rumours regarding the safety of the shots.

Only 2.29 per cent of Hingoli district’s population has been vaccinated so far. Anjawada gram panchayat in the district is now offering an insurance of Rs 5 lakh to those who take a Covid test and get a shot.

Collector Ruchesh Jayavanshi said the gram panchayat will pay the premium for the insurance through its income from house and water tax. “This is a way to encourage people, end their fear. It is a beginning and if more gram panchayats join the initiative, it will help,” he said.

The announcement, authorities say, has started showing results and some villagers have come forward.

“The sarpanch has explained to us, now I am less scared. I have undergone a test and will also take the vaccine,” said a villager.

In Nashik district, authorities are battling the same hesitancy. Nitin Pawar, NCP MLA from Kalvan Nashik, has offered to give Rs 15 lakh to gram panchayats who spread awareness and ensure full vaccination. “People are afraid that they will die after taking the vaccine, they resort to herbs if they get sick. Sarpanches, who are local people, can explain them better. I have called upon gram panchayats to carry out awareness drives. I will give Rs 15 lakh from government funds.”

Even in the villages of Ballarpur tehsil in Chandrapur district, there is fear that the vaccines may cause harm.

“We are all healthy, I don’t think we should take it, there is a rumour that a man died after taking the vaccine. We are safe at home, we don’t need to get tested,” said a villager.