New Delhi: The veteran music composer Shravan Rathod of Nadeem-Shravan duo fame died due to COVID-19 complications on Thursday, April 22, 2021. The 66-year-old noted composer’s sudden death sent a shock wave across his family, fans and friends. Amid this crisis, reports surfaced online about the hospital withholding his mortal remains over a hefty bill amount of Rs 10 lakh.

However, soon after this, SL Raheja Hospital, Mahim – a Fortis Associate released an official statement denying all such claims and calling them false. Here’s what the statement reads:

“With profound grief, we share the news of the passing of music composer Shravan Rathod, of the Nadeem-Shravan fame. As we offer our condolences to the bereaved family, we remain in touch with the family to offer support that may be required in these difficult times. In conjunction with the family, we refute all false claims about holding back the deceased for payments; unverified stories based on hearsay further aggravates the pained family. We extend our deepest sympathies to the family.” 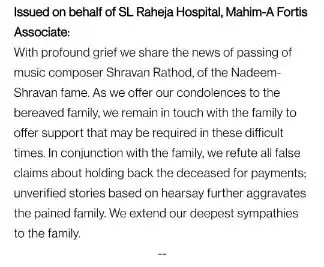 The ace music composer was admitted to SL Raheja hospital in a ‘critical’ condition after testing positive for COVID-19 recently. He breathed his last in the hospital. “He passed away around 10:15 PM tonight. Please pray for his soul,” his son, musician Sanjeev Rathod, told PTI.

The musician had been under observation at the hospital for a few days.

Nadeem-Shravan were among the most popular music composers in the 90s, giving chartbuster soundtracks in films like Aashiqui, Saajan, Pardes and Raja Hindustani amongst others. After their split in the mid-2000s, the duo reunited to compose for David Dhawan’s Do Knot Disturb in 2009.

Can you recognise Kapil Sharma in this 23-year-old pic from college? Comedian just dropped a major throwback memory! | People News

Sambhavna Seth on father’s death: It was not just COVID which killed him | People News