Latest patent filings reveal that Honda has patented an electric mini-bike, something like the Honda Grom, but with an electric powertrain. 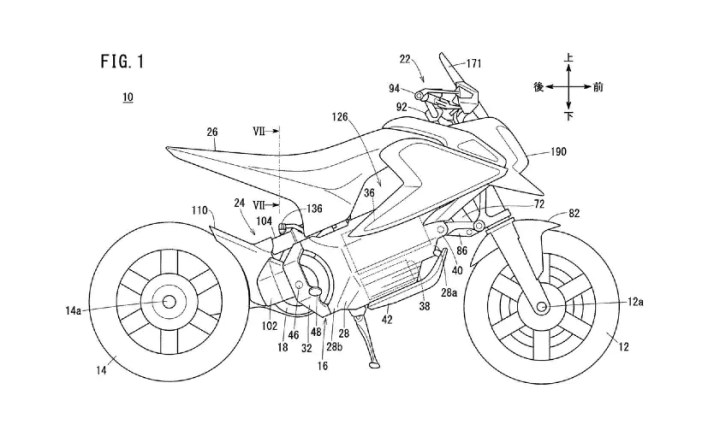 Recent patents filed by Honda in Japan show a mini-bike concept, but with an electric powertrain. The size and style of the bike in the patent filings is clearly inspired by the popular Honda Grom mini-bike, so this electric mini-bike, if it reaches production, will be positioned as a fun-to-ride motorcycle. However, the drawings reveal that it’s not simply an electric version of the Grom, but a completely new bike from the ground up, and designed to be a new electric bike. A monocoque-style chassis houses the battery, with the electric motor mounted behind the battery. And the front suspension is not conventional telescopic, but something similar to the Hossack-type fork arrangement seen on the Honda Gold Wing, with double wishbones and girder-style forks, and a monoshock bolted to the front of the battery case.

According to reports, the bike seen in the patent filings is more of a concept, rather than something that will likely see production. With last year’s motorcycle shows all being cancelled, it’s likely that Honda will showcase the new electric bike as a concept at some future motor show. What the patents indicate is that Honda may be looking to develop a fun electric motorcycle as well, rather than develop something which will directly compete with petrol-powered commuter bikes, or even go head-to-head with internal combustion engines. As things stand today, the patent filings only suggest that Honda is exploring multiple options in the electric side of things, and the next couple of years may prove to be interesting.

Mamata Banerjee Slams BJP At Rally, Says “You Brought Covid And Ran Away”
28 mins ago

Rahul Gandhi Takes On BJP, Trinamool In Bengal
46 mins ago