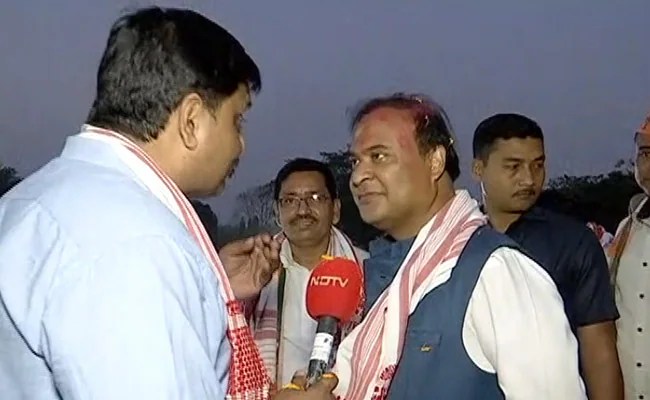 Himanta Biswa Sarma is the BJP’s pointsperson for the entie northeast region.

Prime Minister Narendra Modi and the BJP parliamentary board will decide who the next Chief Minister of Assam will be and that was none of his concern, state Cabinet Minister Himanta Biswa Sarma has said. Expressing confidence at his party’s victory in the ongoing Assembly polls, he downplayed the Bodoland People’s Front (BPF) and its chief, Hagrama Mohilary’s, ability to influence things. The next two of the 3-phase election will be held on April 1 and 6, with the results to be declared on May 2.

Amid campaigning in Udalguri district’s Kalaigaon, where he was even seen dancing with people, the Assam Finance Minister, who is also the BJP’s pointsperson for the entire northeast region, told NDTV that as long as “people loved him” nothing else mattered.

“My closeness with the people of Assam is extremely high. You stay here for two days and then you will understand,” Mr Sarma, who is also the state’s Health, Education, Planning, and Public Works Minister, told NDTV.

“If people keep loving me like this, then I have no tension…People know that I will do what I have to do…they trust me a lot,” he said.

When asked who the next Chief Minister of the state would be, he brushed it off saying “let my party handle that”. Earlier this month, too, he had said “we are all army of Narendra Modi”.

The 52-year-old has been campaigning for at least 16 hours-a-day, overshadowing all Assam politicians, both within and outside the BJP. His campaign song “Ahise Himanta ahise” (Himanta has arrived) has reportedly gone viral. Many say that despite Chief Minister Sarbananda Sonowal’s impeccable image, it is Mr Sarma who will be key for the BJP.

When asked the same question yesterday, Chief Minister Sonowal said: “The question is not whether Sonowal wants to remain in power. Question is BJP has done great work. We want the party to get elected again. PM Modi’s blessings are for all of us. All ministers have helped us.”

A long-time Congress leader, Mr Sarma joined the BJP in 2015 and was quickly elevated as the party’s go-to man for the entire northeast region.

When asked in Kalaigaon about the challenge from Bodoland’s Mohilary, he said no one ought to be overrated.

“We defeated Hagrama Mohillary recently. He lost his own seat. We should not overrate anyone. What will a person who couldn’t hold on to his own seat do for the people?” Mr Sarma said, referring to the Bodoland Territorial Council (BTC) election held towards the end of last year.

The BPF, which has ruled BTC for close to 17 years, won only 17, three less than what it had in 2015. The outfit still emerged as the single-largest party, though.

Interestingly, the BPF had been in alliance with the BJP during the last election. This time the BJP not only went solo, but even took on the BPF. However, the BJP, which was earlier in alliance with BPF, went with the United People’s Party Liberal this time to form the Council, ousting the BPF.

Festival Of Joy, Happiness And Laughter

Government Committed To Ensure Adequate Availability Of Vaccines; All Need To Work Together In COVID-19 Fight
1 hour ago

Not Surprising That China Operating In Indian Ocean: Navy Chief
1 hour ago