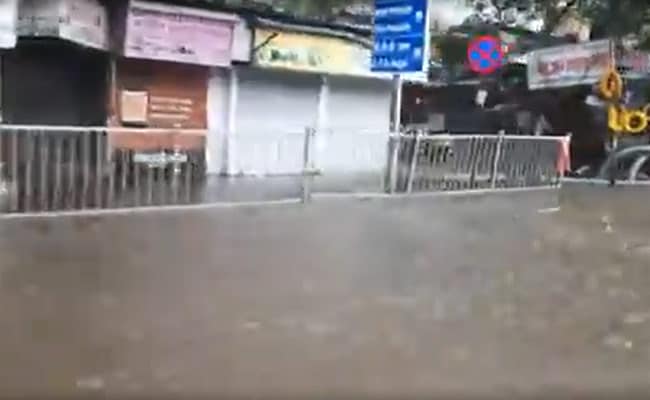 The southwest monsoon reached Mumbai early Wednesday morning – a day ahead of schedule – with heavy rainfall over the city and nearby suburban areas leading to flooded roads and subways.

Over the same period, Belapur in Navi Mumbai recorded 168 mm of rain (with 152 mm in the past six hours), Chembur and Mumbai Central recorded 125 mm and 112 mm, respectively.

The Worli and Malvani regions recorded 105 mm each, with Kandivali, Borivali, Mumbra, Powai and Juhu all recording between 71 mm and 94 mm of rainfall.

According to the Brihanmumbai Municipal Corporation, Mumbai and its eastern and western suburbs recorded 48.49 mm, 66.99 mm and 48.99 mm rain, respectively, in 24 hours ending 8 am.

Waterlogging has been reported from several low-lying areas in Mumbai, including the Gandhi Market area of King Circle, from Sion and the Milan subway in Vile Parle.

Visuals from the Milan subway showed autos and two-wheelers wading through knee-deep water.

A video from Sion showed roads already flooded with ankle-deep water. Another video – of the Western Express Highway – showed overcast skies with the horizon shrouded in dark grey clouds.

Local train services – the lifeblood of the city – have been largely unaffected so far, although services from the Chhatrapati Shivaji Maharaj Terminus (CSMT) to Kurla have been suspended since 9.50 am due to waterlogging and heavy rainfall and waterlogging between Sion and Kurla.

The routes of some BEST buses – the city’s public transport provider – have been diverted.

A high tide of 4.16 metres is expected at 11.43 am, the Mumbai municipal corporation has said.

The weather department has predicted heavy rainfall over parts of the city and the Konkan region, with the monsoon expected to advance further into the state today and move into Telangana and Andhra Pradesh, as well as Odisha and Bengal, over the next 48 hours.