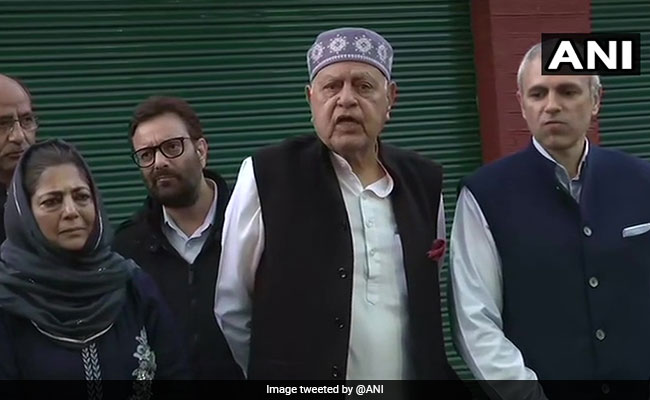 The People’s Alliance for Gupkar Declaration (PAGD) will meet on Tuesday to discuss the Centre’s invitation to mainstream political parties of Jammu and Kashmir for an all-party meeting to be chaired by Prime Minister Narendra Modi on June 24, a leader of the grouping said.

The PAGD is an alliance of six parties in Jammu and Kashmir, including the National Conference and the PDP, formed in the aftermath of the Centre’s August 2019 decision to nullify Article 370 and split J&K into two union territories.

“The alliance meeting is scheduled to take place on Tuesday at 11 am,” a PAGD leader told PTI.

He said the meeting would take place at the Gupkar residence of National Conference (NC) president Farooq Abdullah, who is also the chairman of the alliance.

The leader said the alliance members would discuss the Centre’s invitation to mainstream political parties of Jammu and Kashmir for the talks.

PAGD spokesman and senior CPI(M) leader M Y Tarigami confirmed the meeting of the alliance is scheduled to take place on Tuesday to discuss the invitation.

“The process of discussions is on and we are meeting on Tuesday to finalise (the decision on the invitation). We will let our decision known afterwards,” he said.

Invitations have been sent out to 14 political leaders from Jammu and Kashmir including four former CMs for a high-level meeting to be chaired by Prime Minister Narendra Modi in New Delhi on June 24, which is expected to set the roadmap for holding assembly elections in the UT.

The PM’s meeting with the political parties from Jammu and Kashmir is part of the Centre’s initiatives to bolster political processes, including holding assembly elections, in the union territory.

Asked if the member parties of the PAGD have left the decision on whether to participate in the PM’s meeting to the alliance, the PAGD leader quoted above said the constituents were part of the “larger alliance” and will discuss the issue together.

“See, the invitations have been sent to individual leaders and not to the alliance and not even to parties to send their representatives… But, as we happen to be together as the constituents of the larger alliance, we will discuss the issue together as well,” he said.

He added that a united approach will be “good for the health of our society and our politics”.

“There would be a commonality in our approach this way. That is what is required,” he said.

A leader from the NC said the parties have left the decision on the participation in the PM’s meeting to the alliance.

“See, it is not only about a meeting with the PM. There has to be a discussion on the stand to be taken, the way forward and other such things. While the intra-party consultative process will continue, the PAGD will meet and discuss the issue collectively,” he said.