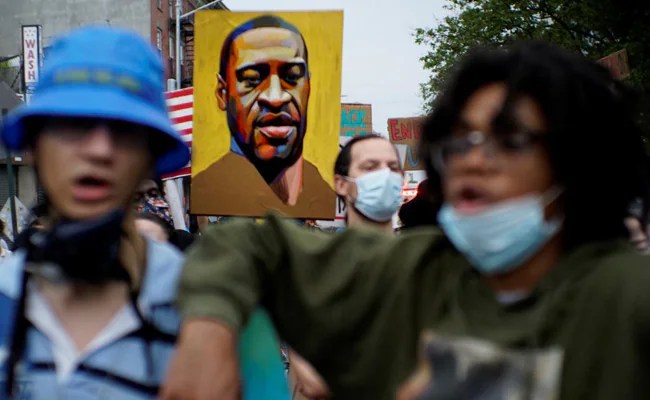 George Floyd was being arrested on suspicion of passing a counterfeit $20 bill in a nearby store. (File)

A respiratory expert testified on Thursday that George Floyd died from lack of oxygen and police officer Derek Chauvin’s knee was on his neck “more than 90 percent of the time” that he was handcuffed, facedown in the street.

Dr Martin Tobin, a pulmonologist, told the jury at Chauvin’s murder and manslaughter trial that he had watched videos of Floyd’s May 25, 2020 arrest “hundreds of times.”

“This caused damage to his brain,” he said, and arrhythmia — an irregular heartbeat — which “caused his heart to stop.”

The 45-year-old Chauvin, who is white, was seen in a video taken by a bystander kneeling on the neck of a handcuffed Floyd for more than nine minutes as the 46-year-old African-American man complained repeatedly that he “can’t breathe.”

The video of Floyd’s arrest touched off protests against racial injustice and police brutality in the United States and around the world.

Tobin said Floyd’s breathing weakened because he was face down on the street, handcuffed and with Chauvin and other officers on his neck and back.

Eric Nelson, Chauvin’s defense attorney, has suggested at several points during the trial that Chauvin’s body weight was actually on Floyd’s shoulder or back at times and not on his neck.

“Officer Chauvin’s knee is virtually on the neck for the vast majority of the time,” he said, “more than 90 percent of the time.”

Pre-existing conditions not a factor

The Irish-born Tobin is testifying as an expert witness for the prosecution.

The Chicago-based doctor said he has testified previously at medical malpractice trials but this is his first criminal trial and he is not being paid.

Chauvin, who has pleaded not guilty, faces up to 40 years in prison if convicted of the most serious charge — second-degree murder.

Chauvin, a 19-year-old veteran of the Minneapolis Police Department, was fired from the force after Floyd’s death.

Prosecutors are seeking to prove that Floyd’s death was due to asphyxiation, while Chauvin’s defense claims it was due to illegal drugs in his system and underlying health conditions.

Tobin dismissed defense claims that any pre-existing medical conditions may have contributed to Floyd’s death.

Forensic scientist Breahna Giles testified on Wednesday that pills containing methamphetamine and fentanyl were found in Floyd’s car and in the police car, with some pills having saliva that matched Floyd’s DNA.

Several high-ranking Minneapolis police officers have testified that Chauvin’s use of force against Floyd was excessive.

Floyd was being arrested on suspicion of passing a counterfeit $20 bill in a nearby store.

A paramedic told the jury last week that Floyd was already dead when an ambulance arrived and that Chauvin was still kneeling on his neck.

Police officers are rarely convicted in the United States when charges are brought and a conviction on any of the counts against Chauvin will require the jury to return a unanimous verdict.

Three other former police officers involved in the arrest are to be tried separately later this year.

IPL 2021: RCB all-rounder Shahbaz Ahmed changes game with 3 wickets in an over against SRH – WATCH | Cricket News
11 mins ago

Mamata Banerjee Slams BJP At Rally, Says “You Brought Covid And Ran Away”
32 mins ago