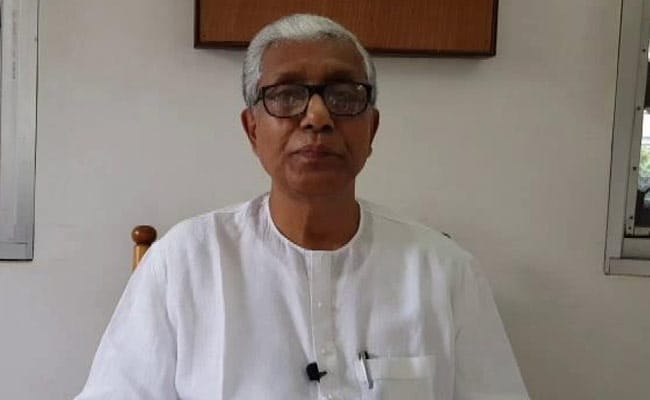 Manik Sarkar said even in the past, the police had stopped them from meeting supporters.

Tripura Chief Minister Biplab Kumar Deb’s claims on terror attacks in the state stopping since the 2018 elections fell flat as leader of Opposition and former chief minister Manik Sarkar and other CPM MLAs faced attack in South Tripura district today. The CPM claimed that the attacks have been carried out by miscreants under instructions of the BJP leadership.

Today, Mr Sarkar and other MLAs including Deputy Opposition Leader Badal Choudhury, were on way to meet party supporters who recently faced similar attacks.  But their convoy was stopped in Santirbazar area and attacked by hundreds of people in presence of the state police.

The former Chief Minister said that as soon as they reached in Santirbazar, they saw a large number of people standing on both sides of the road, raising slogans and demanding that they go back.

“The Santirbazar police station officer in-charge requested us to turn back,” he said. “When I asked the people not to attack the police men, they responded with stones, brick, eggs and water bottles,” he added.

The former Chief Minister said even in the past, the police had stopped them from meeting supporters. He also accused senior police officers of not taking appropriate measures for their travel.

Tripura Law minister Ratan Lal Nath said that the CPM leaders are creating issues intentionally. In reality, those who were CPM supporters in the past raised slogans, he added.

“The CPIM has taken huge money from the youths during their tenure assuring job opportunity through backdoors, now as they are moving in other parts of the state, the old supporters are raising slogans against them,” Mr Nath said.

He also said that the CPM’s attempt to create panic would not be successful as people are aware of their 25 long years of misrule.

In March, the CPM leaders had raised questions over the attack on Deputy Opposition Leader him from visiting his own constituency, he said. In response, the Chief Minister had expressed disappointment and assured that no MLAs would face any difficulty while visiting his area.

“We believe that a section of people from his party are trying to instigate the violence in the state. It is the BJP’s fear of Communists that led to increased violence after their failure in four states in the recent concluded elections,” Mr Sarkar said.

“The state leadership is encouraging  the miscreants to carry out the attacks on the opposition party leaders,” he added.