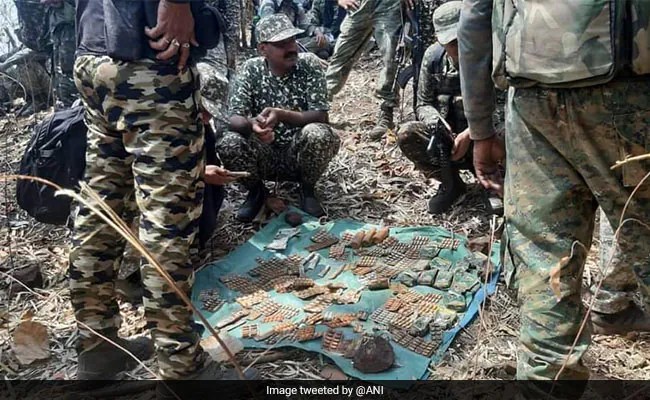 A cache of arms and ammunition was recovered from the spot.

Five Maoists, including two women cadres, who all were carrying the collective reward of Rs 43 lakh on their heads, were killed on Monday morning in an operation conducted by C-60 commandos in Maharashtra’s Gadchiroli district, a senior police officer said.

A cache of arms and ammunition, including an AK-47 rifle, a 12-bore rifle, a 303 rifle, an 8 mm rifle, and some electronic items, was recovered from the spot located in Khobramenda forest area.

Police suspect that at least 4 to 5 Maoists were injured in the exchange of fire.

Gadchiroli SP Ankit Goyal told reporters that C-60 commandos had received the information that Maoists are gathering in a large number in Tipagarh forest area against the backdrop of ”Naxal week” being observed by them with the possibility of a planned ambush.

“Gadchiroli Police’s C-60 commandos conducted the operation on Monday morning in Khobramenda forest area where they were attacked by 40 to 50 Maoists. The exchange of fire lasted for two to two-and-a-half hours in which five Maoists were killed,” he said.

A release issued by the office of the SP in Gadchiroli identified one of the killed Maoists as Rushi Raoji alias Bhaskar Hichami (46) of North Gadchiroli division carrying a bounty of Rs 25 lakh on his head. He had total of 155 offences registered against him, including 41 cases of murder, 78 encounters with police and other offences, it said.

On Saturday, the district police seized a rifle and three pressure cooker bombs which Maoists were allegedly planning to use to ambush security forces, an official had said.

Kamal Haasan While Campaigning In Puducherry: Here To Serve You

Harley-Davidson Electra Glide Revival To Be Introduced
12 mins ago