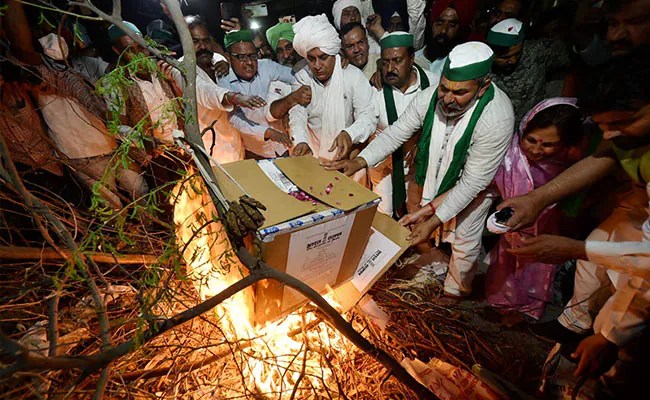 On protest against the centre’s new agricultural laws, farmers camping on the outskirts of Delhi and in Punjab burnt copies of the centre’s new farm laws during ‘Holika Dahan’ – a ritual observed a day before the festival of Holi, farmers groups said on Sunday.

The protesting farmers celebrated Holi at the borders of the capital and maintained that their agitation will continue till the farm laws are repealed and a separate law on minimum support price is enacted, the famers’ umbrella body Samyukta Kisan Morcha said in a statement.

The Samyukta Kisan Morcha also said that it will observe “FCI Bachao Diwas” on April 5, adding that offices of the Food Corporation of India (FCI) will be picketed from 11 am to 5 pm across the country.

“The government has made several attempts to end the minimum support price (MSP) and public distribution system (PDS) indirectly. The FCI’s budget has also been reduced over the last few years. Recently, the FCI also changed the rules for procurement of crops,” the statement said.

In Punjab too farmers burnt copies of the three contentious central farm laws at many places in on Sunday to mark Holika Dahan, when bonfires are lit on Holi eve symbolising the victory of good over evil.

Thousands of farmers, mainly from Punjab, Haryana and western Uttar Pradesh, have been camping at Singhu, Tikri and Ghazipur border of Delhi with their main demand of complete repeal of the three farm laws and a legal guarantee for the minimum support price on their crops.

So far, there have been 11 rounds of talks between the protesting unions and government, but the deadlock has continued as both sides have stuck to their stand.

In January, the government had offered to suspend the farm laws for 12-18 months, which was rejected by the farmer unions.

When Himanta Biswa Sarma From BJP, Gaurav Gogoi From Congress Broke Into A Dance In Assam