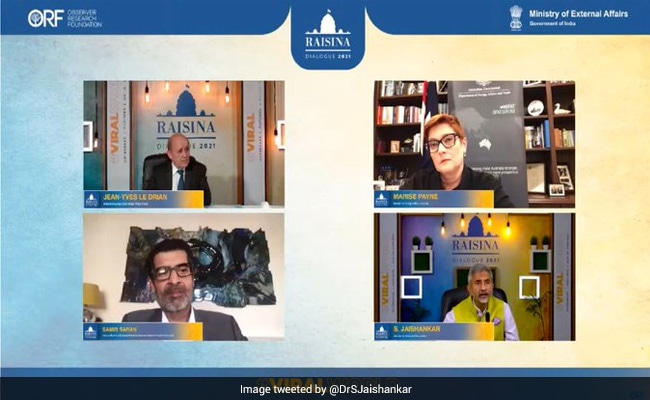 The Quad comprises India, the US, Australia and Japan.

The Indo-Pacific construct reflects a more contemporary world, mirroring the overcoming of the Cold War and not reinforcing it, External Affairs Minister S Jaishankar said today while hitting out at the critics of the Quad grouping.

At a virtual dialogue with his French and Australian counterparts, Mr Jaishankar said the use of words like ‘Asian NATO’ in reference to the Quad is sort of a mind game that people are playing.

“The purpose of coming together is actually frankly to find ways of working for our national benefit, for our regional benefit and for global benefit,” he said while talking about the Quad at the Raisina Dialogue.

The Quad comprises India, the US, Australia and Japan.

The leaders of the member nations last month held a virtual summit vowing to expand cooperation in a range of areas and resolving to work towards a free and open Indo-Pacific.

“The kind of using of words like Asian NATO etc, this is a sort of mind game which people are playing,” Mr Jaishankar said.

Russian foreign minister Sergey Lavrov, at a press conference in Delhi last week, mentioned ‘Asian NATO’ which was seen as a thinly-veiled reference to the Quad. Russia has been critical of the Quad.

“That kind of NATO mentality has never been India’s. If it has been there in Asia before, I think it is in other countries and regions, not in my (country),” he said.

The external affairs minister said the Indo-Pacific refers to a seamless world which was historically present in the form of Indian-Arab economic-trading ties and cultural influences from ASEAN nations like Vietnam and the east coast of China.

“I would argue that in a way, the Indo-Pacific is a return to history. It reflects the more contemporary world. It is actually the overcoming of the Cold War and not reinforcing it,” Mr Jaishankar said.

“I very much hope that all of us who run contemporary foreign policy look at it that way,” he added.

Incidentally, at a media briefing on Wednesday, Russian ambassador Nikolay Kudashev criticised the Indo-Pacific strategy of the western countries describing it as “dangerous” and an effort to revive the Cold War mentality.

Mr Jaishankar said Indo-Pacific is a clear message that India will not be constrained between the Malacca Strait and the Gulf of Aden as the country’s interests, influence and activities go way beyond.

The virtual dialogue focused on cooperation in the Indo-Pacific as well as in dealing with the adverse impact of the coronavirus pandemic.

“That list will tell you what is in our minds and what is the purpose of what we are trying to do,” he said.

In her comments, Australian foreign minister Marise Payne described the situation in Myanmar as “very challenging” and “tragic” for those who had been working hard on a democratic transition in that country for so long.

She said Australia has a clear perspective of acknowledging the importance of working with ASEAN in identifying solutions in response to the military coup in Myanmar.

“ASEAN is key to our Indo-Pacific region; its centrality is fundamental for Australia and Myanmar is a key member of the ASEAN,” she said expressing concern over increasing violence in Myanmar.

She said Australia strongly supports bringing together an ASEAN leaders’ meeting in the coming week to impress upon Myanmar for steps for cessation of violence and use of armed forces against civilians in that country.

Mr Jaishankar too emphasised on finding a solution to the Myanmar situation.

“We engage with all parties in Myanmar very very intensively. We are fairly in touch with ASEAN in terms of what they are doing. All of us will have to find ways to come together in trying to find what is a common solution,” he said.

French foreign minister Jean-Yves Le Drian said the 27 members of the European Union adopted sanctions against the main authorities of the military of Myanmar and they are prohibited from travelling to Europe.

In her remarks, Ms Payne also emphasised on the coronavirus pandemic response and recovery efforts.

She said the developing nations across the Indo-Pacific are facing various challenges including on the economic front in view of the pandemic.

Ms Payne also touched upon issues like challenges to rules-based global, sustainability of the oceans, climate change and strategic competition being witnessed in several parts of the globe.

French foreign minister Jean-Yves Le Drian underlined the need for adopting a pragmatic approach in forging deeper cooperation among the three nations in the Indo-Pacific region.

He also referred to continuing efforts in tackling the financing of terrorism.