I never thought there would be a point in my professional life when something else as rudimentary as a steam inhaler would become smart enough to warrant an overhaul. After all, they have always been basic and something that a nearby pharmacy would have an abundant supply of. And never has any of the well-known health and wellness brands ever really played a role. No surprise, I’ve often had indoor air purifiers clock the fan speed and warn of high levels of air pollution a few minutes after using some of these steamers. Bad quality plastic? Is unclean water being used? After all, you inhale and push this steam deep into your lungs. Now don’t worry if you decide that the Nirvana Being Mypurmist 2, priced at Rs 9,999, is worth your time and money. Steam inhalation also plays an important role in prevention and if you are unlucky there is also COVID treatment.

The thing about the Mypurmist 2 is that it is not just any steam inhaler with a tank where you fill water, dip the heating element and then take precautions to avoid getting deposited by the boiling water. This is as advanced as things come. The United States Food and Drug Administration (FDA) has classified this as a Class 1 medical device. So does the Health Canada Department of the Government of Canada. The FDA definition of Class 1 medical devices says, “Not intended for use to support or sustain life or be of significant importance in preventing harm to human health, and may not pose a potentially unreasonable risk of disease. or injury. ” And it is the last part of the sentence that carries the maximum weight. This is one of those rare steamers that does not pose a risk of hot water overflowing. The way it is designed, the way the heating works, the way the steam is generated and the way you even top up the Mypurmist 2 ticks all the boxes on the health and safety aspects. And at no point do you interact with the water in the refill packs or the steamer itself, which ensures that purity is not compromised. 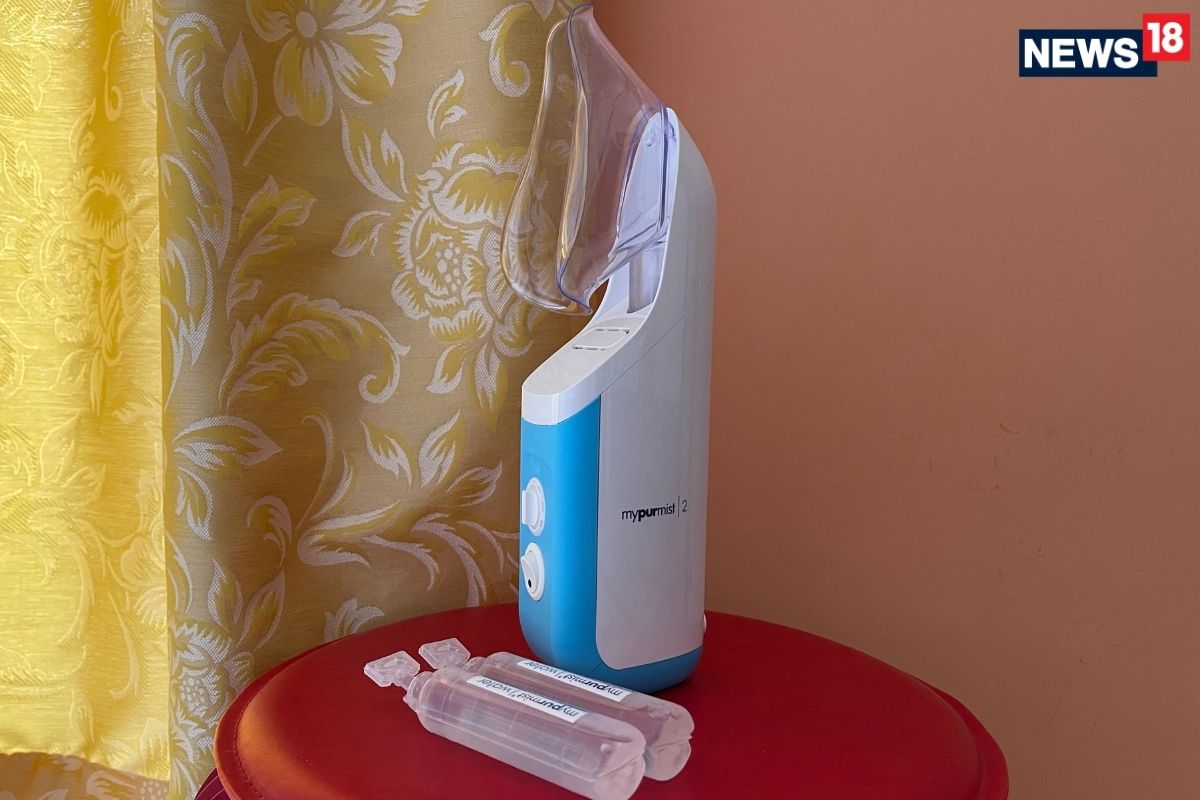 Setting up the Mypurmist 2 requires a bit of attention, but it’s more about appreciating the attention to detail more than anything else. First, there is a very handy protective pouch that is large enough to hold the steamer, soft mask, water fillings and power adapter. That also protects this from dust, another of those invisible and underestimated airborne pollutants. The steamer itself is one piece and you don’t need to disassemble or reattach them at any point. All you need to do is apply the soft mask before starting the steaming session – and this is removable which means you can wash this regularly and even have different masks for each family member. On the spine curve, you would notice a small window, which is your visual gateway to the water reservoir that holds the Mypurmist 2 within itself. And above that is a blue-colored gate, which must be opened to fill the water. And you don’t just open this up to randomly fill in water. That’s where the Mypurmist Ultrapure sterile water refills come into the picture. The Mypurmist 2 comes with 8 of these, and you will have to buy more later (pack of 20 refills costs Rs 799). You will need to twist the lid of the bottle and insert it into the blue refill port with minimal force and push the refill bottle to empty it completely into the tank. Keep in mind that refilling sterile water has a recurring cost, depending on how often you use it.

Specific on the point of these Ultrapure Sterile Water Refills, Nirvana Being says these are refills that are filled with sterile water that is free of viruses, bacteria, allergens and other waterborne pollutants. This is what you breathe in. The bundled pack of 8 sterile water refills should last you a whopping 40 sessions – assuming each session lasts up to 15 minutes and you do this routine twice a day. If you use these less, they will last longer. In my experience, topping up sterile water takes about 100 minutes of steam inhalation before you have to refill the tank. Specific to the steaming experience, the Mypurmist 2 also makes significantly less noise – both from the water and the heating element that other steamers have, which is great if you have ear issues. From my personal experience, my dad and I both struggle with a persistent condition called tinnitus – every spike in ambient noise exacerbates the high pitched noise in our ears. That’s why we’ve been staying away from steamers for months now, because they make noise, and that too from very close range. At the front you have the temperature dial that sets the steam temperature anywhere from 38 degrees to 46 degrees, significantly less than the unnecessary boiling point that most basic steamers reach. With the Mypurmist 2, there is no chance that the water will splash out or even scorching hot droplets will hit your face directly. The steam also comes out very controlled and you hardly waste any steam. How your body and respiratory system react to steam will be different from what I felt, for example, but there is that distinct feeling that things are opening as you breathe, indicating that a blockage that is otherwise in the nasal passages is being released. The attention to detail is perhaps best attested by the small HEPA air purifier built into the Mypurmist 2. Basically, when you breathe in steam, you need to take a deep breath. That means more ambient air is being drawn into your lungs. Near your face, the Mypurmist 2 has an air purifier that throws out filtered air that you inhale immediately. Also, once your steam session is over, do not immediately turn off the power to the Mypurmist. 2. There is a built-in self-cleaning and drying function that kicks in when you turn off the Mypurmist 2 with the on / off button on the steamer itself – and leave the mains power on. You can hear the mechanism working faintly after which it shuts off. This is to prevent moisture from remaining in the airways from which the steam comes.

Nirvana Being also bundles 6 sessions of aromatherapy with eucalyptus and peppermint, but to be honest I can’t comment on that as it’s something none of us use at home. But the idea of ​​sterile water for a steamer comes across just as well thought out, even though there are recurring costs involved. After all, you wouldn’t want to inject steam derived from unclean and impure water into your lungs.

The final word: good things cost money, and that will not change

I’ve said it before, and I’ll say it again. This is a really smart steam inhaler that ensures that the water and air you breathe is impeccably pure. The design is such that you do not run the risk of hot water, unlike other simple and not so well thought out steamers. That said, there’s no escaping the fact that the Nirvana Being Mypurmist 2 (available at nirvanabeing.com) costs the kind of money you wouldn’t otherwise think to spend on a steam inhaler. But if you’re someone with ongoing throat and nose problems, prone to seasonal viral infections, or just struggling with a dry nose and throat, then a high-quality steamer is what you need. And it really doesn’t get any smarter, cleaner or purer than the Mypurmist 2. As with most new age and high-tech healthcare gadgets, this also costs a bit of money. And it ultimately comes down to how much you are willing to spend on finger things that can affect your health in the long run. Whatever happens, you’ll be looking at the price tag more than once.