England fast bowler Ollie Robinson apologised ‘unreservedly’ for historical racist and sexist tweets that came to light on Wednesday (June 2) when he made his test debut against New Zealand at Lord’s. Robinson, 27, was the pick of England’s bowlers with two wickets but his day turned sour when his tweets from 2012-2013 went viral on social media.

“On the biggest day of my career so far, I am embarrassed by the racist and sexist tweets that I posted over eight years ago, which have today become public. I want to make it clear that I’m not racist and I’m not sexist,” Robinson said in a statement. “I deeply regret my actions, and I am ashamed of making such remarks. I was thoughtless and irresponsible, and regardless of my state of mind at the time, my actions were inexcusable. Since that period, I have matured as a person and fully regret the tweets.” 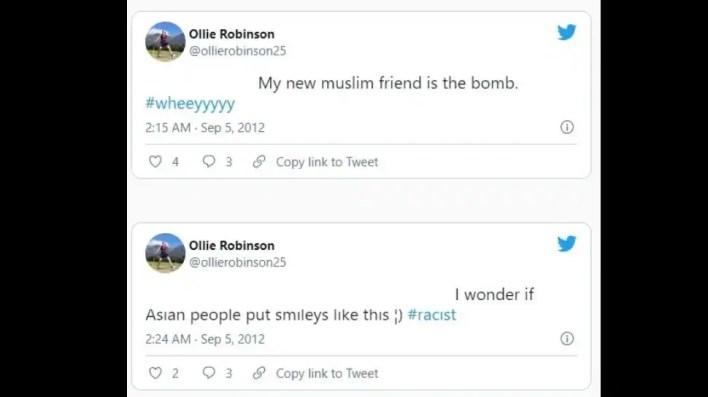 Robinson said he did not want tweets from eight years ago to ‘diminish the efforts’ of his teammates and the country’s cricket board in efforts to combat racism and sexism.

“I will continue to educate myself, look for advice and work with the support network that is available to me to learn more about getting better in this area,” he added. “I am sorry, and I have certainly learned my lesson today.”

The England team had begun the day by sharing a ‘moment of unity’ with New Zealand, wearing anti-discrimination T-shirts. ECB Chief Executive Officer Tom Harrison said he did ‘not have the words to express how disappointed’ he was.

“Any person reading those words, particularly a woman or person of colour, would take away an image of cricket and cricketers that is completely unacceptable. We are better than this,” Harrison said.

“We have a zero-tolerance stance to any form of discrimination and there are rules in place that handle conduct of this nature. We will initiate a full investigation as part of our disciplinary process.”

French Open: Serena Williams through to third round after second-set blip | Tennis News

Legendary sprinter Milkha Singh passes away at 91 | Other Sports News