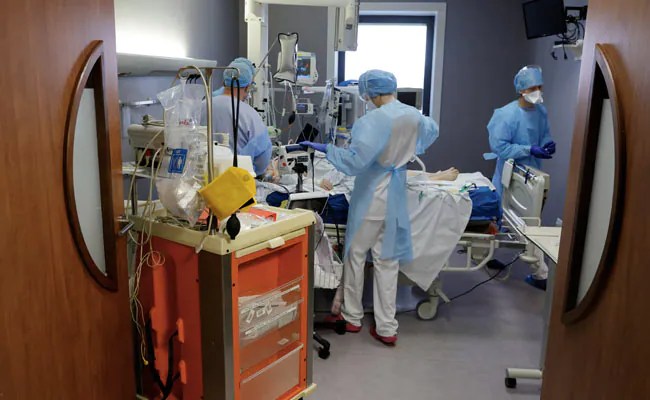 As of Sunday, nearly 7.8 million people had received a first dose of vaccine in France

The number of COVID-19 patients in France’s intensive care units has risen to a new high for this year, health ministry data showed on Sunday, as doctors warned a third wave of infections could soon overwhelm hospitals.

There were 4,872 ICU patients being treated for COVID-19, close to a November peak during France’s second wave of the virus, though well below a high of about 7,000 in April last year. The number of new infections fell, however, by around 5,600 to 37,014.

A group of 41 hospital doctors in the Paris region signed an article in the newspaper Le Journal du Dimanche warning that they might soon have to start choosing between patients for emergency treatment.

French President Emmanuel Macron this week defended his decision to not impose a third full lockdown and to keep schools open, but said further restrictions would probably be needed.

The government is also trying to speed up a lagging vaccination campaign, part of a troubled EU effort marred by shortfalls of AstraZeneca doses that have created tensions with former EU member Britain.

Junior European affairs minister Clement Beaune told France 2 television on Sunday that France would receive 2 million doses out of a batch of 16 million AstraZeneca vaccines held by the Italian authorities amid the EU’s row with the pharmaceutical group.

As of Sunday, nearly 7.8 million people had received a first dose of vaccine in France, the health ministry said.

It also reported a further 131 hospital deaths linked to the virus, taking the country’s toll including nursing homes to nearly 95,000, the eighth-highest in the world.

Teen Girls Charged With Murder, Carjacking Of Pakistan-Origin Driver Mohammad Anwar In US

IPL 2021: RCB all-rounder Shahbaz Ahmed changes game with 3 wickets in an over against SRH – WATCH | Cricket News
41 mins ago