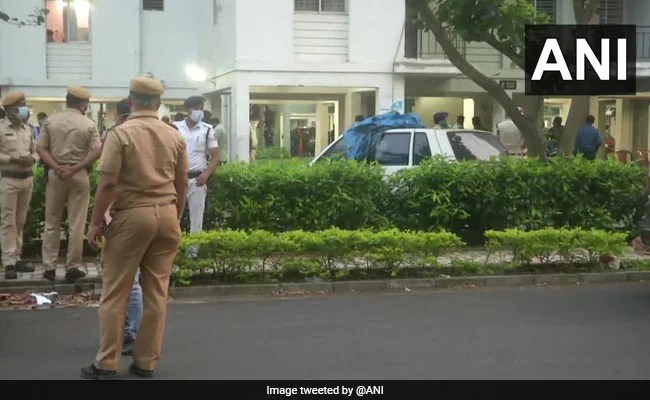 Two wanted gangsters were gunned down in Kolkata on Wednesday.

Days after two wanted drug smugglers from Punjab were gunned down in Kolkata in an encounter, police are probing their link to Pakistan after finding some weapons and a parcel.

Jaipal Singh Bhullar and Jaspreet Singh had gone missing after allegedly killing two policemen in Punjab’s Ludhiana about a month ago.

They were gunned down at an apartment complex in Kolkata’s Newtown area on Wednesday when they fired at the officials of the Special Task Force during a raid at an apartment they were holed up in, said Punjab’s Director General of Police Dinkar Gupta.

Officials said they came to Kolkata from Madhya Pradesh’s Gwalior in a car that had a Bengal registration number.

Investigators have found weapons made in Pakistan and a parcel that had a Karachi address on it.

On Wednesday, V K Goyal, chief of the Special Task Force, had said that an inspector was injured in the shootout and was hospitalised.

“Rs 7 lakh in cash, five weapons and 89 live rounds have been seized,” he had said.

A search has also been launched for the person who took the Kolkata apartment on rent and allowed the two gangsters to stay there, according to news agency PTI.

The police have identified the owner of the flat, where the two men were shot dead by the STF. He is a resident of central Kolkata’s Entally area, the officer said.

Initial probe has revealed that the phone number of the flat owner was taken from a website, and “fake documents” were used to get the flat on rent, PTI quoted an official as saying.

“Efforts are on to find that missing link between the flat owner and the two gangsters,” the officer said.

The killing of Jaipal Bhullar and Jaspreet Singh and the arrest of two of his associates from Gwalior is a big blow to the heroin smuggling network operating from across the border, police said.

The carandbike Awards Break Into Top Ten List For Auto Awards In Asia, Middle East And South Africa
20 mins ago