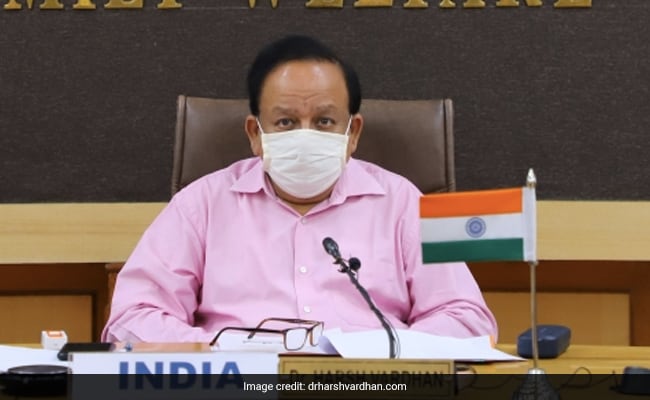 A decrease in the number of Covid cases should never inculcate a sense of complacency among the public, Union Health Minister Harsh Vardhan said on Friday, underlining that the behavioural pattern of putting masks on and off intermittently, improper wearing of masks and not following Covid-appropriate behaviour contributed to the second wave of the viral disease.

Mr Vardhan said this after inaugurating the newly-revamped Hardayal Municipal Heritage Public Library at Chandni Chowk, according to a statement issued by the health ministry.

He dedicated the library, which has an enormous collection of rare books, to the nation. The library has been renovated with a public investment of more than Rs 3 crore.

The MP from Chandni Chowk said the steadily declining number of active coronavirus cases in the country, a trend sustained for 28 days, and less than one lakh fresh cases for the fourth consecutive day have allowed a sliver of opportunity to him to be with the people of his constituency physically, according to the statement.

He expressed his admiration for the rare collection of books in the library such as the Persian Mahabharata, translated by Abul Fazl and composed in the court of Mughal emperor Akbar, a copy of “The History of World” from 1677 AD, handwritten Bhagavata Purana of 1810 AD, Bhrigu Samhita, an old copy of the Quran in Hindi, the first book ever written in “Braj Bhasha”, the native language of the Yamuna plains.

Started in 1862, the library has archived copies of the Delhi Gazette from 1917 to 1988 and has many rare gems in its collection, including 350 manuscripts and 8,000 old books that were in need of proper archiving and storage before the reconstruction, the statement said.

The minister was apprised that several court cases, including one involving the fate of a village on the eve of the country’s partition, was settled in court in favour of India sourcing evidence from the library, it added.

Strongly advising adherence to Covid-appropriate behaviour to everyone present on the occasion, Mr Vardhan said the decrease in the number of active cases of the infection should never inculcate a sense of complacency among people.

“This behavioural pattern of putting masks on and off intermittently, improper wearing of masks and not following Covid-appropriate behaviour contributed to the second wave of Covid. When many of our doctors, nurses became corona warriors in an act of self-sacrifice to protect us, with many of them eventually succumbing to Covid, it is our moral duty to do the maximum to support them…,” he was quoted as saying in the statement.

Speaking on the government’s digitisation drive in the context of digitalisation of library archives, Vardhan said, “Prime Minister Narendra Modi has relentlessly pursued the mission of a Digital India. In the entire lockdown, people could get government benefits directly transferred to their accounts. The JAM trinity has enabled the Direct Benefit Transfer to the account of 10 crore farmers at the push of a button. Similarly, the National Digital Health Mission (NDHM) currently being implemented in the Union territories will bring speed, transparency and accountability in our health system. Such digital interventions in other areas have vastly improved the lives of Indians.”

He observed that these interventions have shattered the popular saying of the 1980s that for Re 1 allocated by the Union government, only 15 paisa actually reach the intended beneficiaries.

Mr Vardhan also said the Centre would soon have enough Covid vaccines at its disposal to fully vaccinate every person aged 18 years and above in the country.

“With the increase in the production capacity, we have more vaccines in June compared to May. As the capacity improves, the supply would ease and soon, there will be enough vaccines to immunise every citizen,” he said.

North Delhi Mayor Jai Prakash said the library would be reopened to the readers, in accordance with the directions of the Delhi Disaster Management Authority (DDMA) in view of the COVID-19 pandemic.

The single-storey structure is one of the heritage buildings of the national capital and its restoration work was completed in a year.

Mr Prakash said over Rs 2.83 crore were spent on the restoration work of the library.

He said the digitisation and conservation work of the rare books of the library was done by the Indira Gandhi National Centre for the Arts.

There are nearly 1.25 lakh books in the library, including 8,000 rare texts and 350 handwritten manuscripts, the mayor said.

The library comes under the North Delhi Municipal Corporation.

Farmer’s companion has come, farming work will be done in a pinch, Eicher PRIMA G3 tractor
53 mins ago