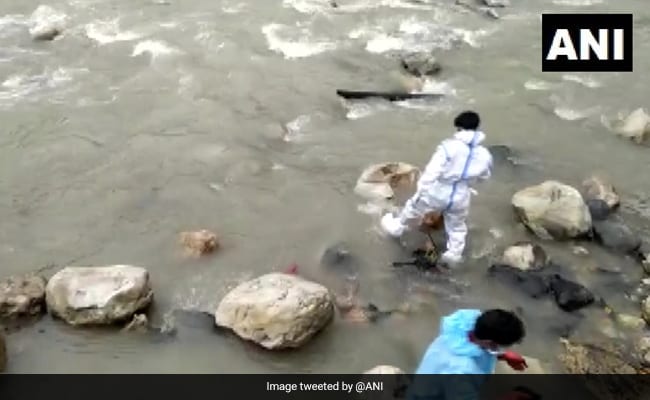 Local residents said parts of bodies had drifted onto the river after a rise in the water level.

Grisly videos have emerged showing stray dogs eating human bodies at Kedar Ghat on the banks of river Bhagirathi in Uttarkashi in Uttrakhand.

Local residents said parts of bodies, some of them half burnt, had drifted onto the bank after a rise in the water level of the Bhagirathi due to rainfall over the past few days.

“I was doing some painting yesterday and I saw these half-burnt bodies and stray dogs gnawing and feeding on them. The District administration and Municipal Corporation should take cognizance of this and do something immediately. It is a matter of concern and I feel that it is the death of humanity,” said a local.

Another local said that there is a possibility that the bodies are of COVID-19 infected people who have been cremated and civic body authorities should take immediate action so as to avoid the spread of infection.

“I request the administration to take proper care of this,” adding that despite local residents putting in complaints to the municipality and the district administration, no arrangements were made to dispose of the bodies after conducting last rites.

Meanwhile, Municipality president Ramesh Semwal said that after receiving complaints from locals, they had assigned a person at Kedar Ghat to cremate the half-burnt bodies, washed up on the riverbank.

“During the last few days, the number of deaths has been increased in our area. I also came to know that bodies are not burnt properly so I have directed the administration to arrange at Kedar Ghat for the cremation of half-burnt bodies,” said Ramesh Semwal.

Previously there have been incidents reported from Uttar Pradesh and Bihar, where a large number of bodies were found floating in the river Ganga.

Authorities believe the relatives of those who died due to the COVID-19 virus, may not have been able to find space or afford the last rites.

The Centre had last month directed authorities in these states to prevent the disposal of bodies in the river.