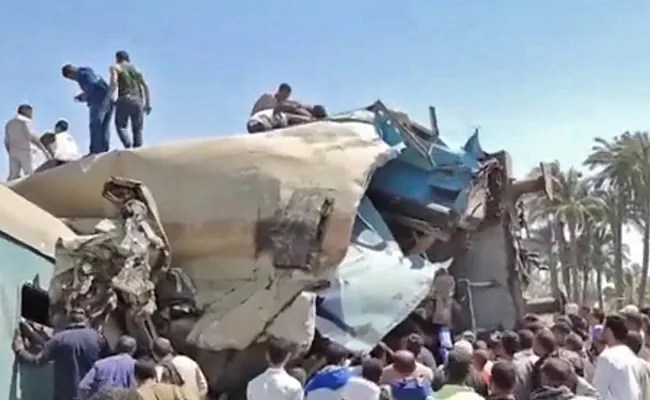 The first victims were laid to rest early on Saturday. (File)

Egypt buried the dead Saturday from a train collision that killed at least 19 people and injured 185, according to a revised count, as investigators probed the country’s latest deadly rail crash.

Health Minister Hala Zayed told reporters that an initial tcount of 32 killed in Friday’s crash was revised down, while the number of injured rose from 165.

“After we honed in on the details of those killed and injured… at this moment there are 185 injured and 19 corpses and three bags of body parts,” Zayed said, without giving further details.

Surveillance camera footage of the accident seen by AFP showed a speeding train barrelling into another as it rolled slowly down the tracks, sending a carriage hurtling into the air in a cloud of dust.

Most of those injured in Friday’s crash that occurred in the Tahta district of southern Sohag province suffered fractures.

The first victims were laid to rest early on Saturday with small groups of family and friends in attendance as residents, who appeared mistrustful of outsiders, kept the media at bay.

President Abdel Fattah al-Sisi pledged tough punishment for those responsible for the crash, the latest in a series of rail accidents to plague Egypt. Such incidents are generally attributed to poor infrastructure and maintenance.

It came as the most populous Arab nation struggles with another major transport challenge — a giant container ship blocking the Suez Canal, a vital shipping lane for international trade.

Early on Saturday Egypt was again struck by tragedy when a building collapsed in the capital Cairo, killing 18 people, state media reported.

At the scene of the rail disaster, technicians worked through Friday evening to remove five dislocated and damaged carriages. By morning the crash area was cleared of twisted metal and debris.

Rail traffic also resumed ahead of the burials.

“We were at the mosque then a child came and told us (about the incident). We heard the collision, so we rushed and found the carnage,” said a 59-year-old man speaking on condition of anonymity.

The first ambulances to reach the scene arrived “around half an hour” after the crash, he said.

“There were children who removed (debris) using wooden ladders,” added the witness, who spent the day helping rescue workers.

Kamel Nagi, a 20-year-old conscript, was on the Cairo-bound train after enjoying a few days of leave.

“Our train suddenly stopped and a quarter of an hour later, the second arrived and struck us,” said Nagi, who suffered multiple broken bones.

“I saw it coming, screamed, then found myself on the ground in great pain,” he said from his hospital bed.

Authorities opened an investigation to determine the circumstances of the accident, while the rail authority blamed the crash on unidentified passengers who “activated emergency brakes” in one train.

The prosecution said it would interrogate several rail employees, including the two train drivers, their assistants and the signalman.

They will also have to undergo drug testing and authorities have seized their mobile phones to examine their call logs, it added.

But media reports on Saturday claimed both train drivers had died of injuries sustained in the crash.

The rail authority said one train hit the last carriage of the other, causing at least two carriages to overturn between the stations of Maragha and Tahta.

Transport Minister Kamel al-Wazir, a former army general appointed by Sisi to lead the ministry, pointed to human error or intervention as playing a role in the country’s rail accidents.

“We have a problem with the human element,” he told a late-night Saturday talk show, pledging to automate Egypt’s rail network by 2024.

The government has spent “hundreds of billions of pounds” to upgrade the railway system over the past four years, he said, acknowledging that the network “has suffered from decades of negligence”.

Egypt’s railway network is one of the oldest in Africa and the Middle East and improving it “will take time”, Madbouli told reporters Friday after visiting the crash site.

One of the deadliest Egyptian train crashes came in 2002, when 373 people died as a fire ripped through a crowded train south of Cairo.

5,000 Fans Tested For COVID-19 Before Non-Distanced Concert In Barcelona

Horrified By Myanmar Military's Reign Of Terror: US