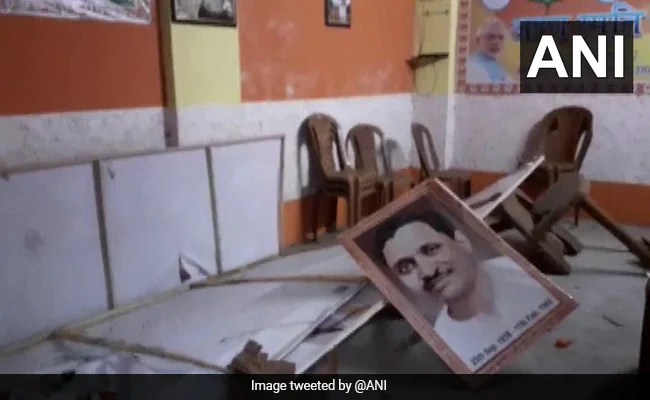 The BJP has announced a nationwide dharna on May 5 against the widespread violence.

The Bharatiya Janata Party (BJP) office and some shops in Ghoshpara road of Bhatpara in Bengal were allegedly vandalised and at least 13 crude bombs were thrown in the area today.

The shopkeepers alleged that the Trinamool Congress is behind the attack as the area is know to be of BJP supporters.

However, local Trinamool leader denied the allegations and said the BJP’s insiders were behind the incident.

The BJP has announced a nationwide dharna on May 5 against the widespread violence allegedly by Trinamool. BJP National President JP Nadda will be visiting West Bengal on May 4 and 5, in view of the widespread post-election result violence.

The BJP has announced a nationwide dharna on 5th May against the widespread violence unleashed by TMC workers post the election results in West Bengal.

This protest will be held following all Covid protocols across all organisational mandals of the BJP.

“The TMC goons vandalised the BJP party office. They also vandalised my shop and the adjacent sweet shop. They attacked us as we are BJP supporters. They were from the minority community. Police came 30 minutes later,” shopkeeper Uttam Shaw said.

BJP National President Shri @JPNadda will be visiting West Bengal on 4-5May, in view of the wide spread post results retributive violence unleashed on BJP workers and supporters by criminal elements in the TMC cadre.

He will be visiting families of the affected karyakartas.

“They ransacked my shop and looted the cash and the articles. 12-13 crude bombs were hurdled. Two live bombs were also there that damaged many motorcycles,” Rahul Kumar Shaw, another shopkeeper, said.

“A bomb was hurdled on the roof of my house. we were sleeping. I anyhow ran out to save the kids. Three bombs were hurdled on our lane,” a resident Shakeel Ahmed claimed.

Bhatpara town Trinamool committee president Debojyoti Ghosh said: “We do not believe in violence. There is no provocation from our side. It is BJP’s internal rift. They have brought so many people from outside with various promises. We have asked the administration to probe the matter and punish the culprits. We want peace in Bengal.”

The police reached the spot after the incident and is investigating the matter.

“TMC goons and workers have vandalised BJP offices in Howrah. The goods have been stolen from there. BJP workers are being beaten into their homes,” tweeted Kailash Vijayvargiya in Hindi.

“After Mamata Banerjee’s victory, her workers are celebrating and vandalising the houses of BJP workers. More than nine BJP workers have been killed so far,” he said.

Inside Star Wars: The Bad Batch, The Clone Wars Spin-Off That’s a Bit Like The Mandalorian

Ex-Doordarshan Director General Archana Datta Says My Husband, Mother Died Without Treatment Within An Hour Of Each Other

Vaccines Must Be Given To States For Free, West Bengal Goes To Supreme Court