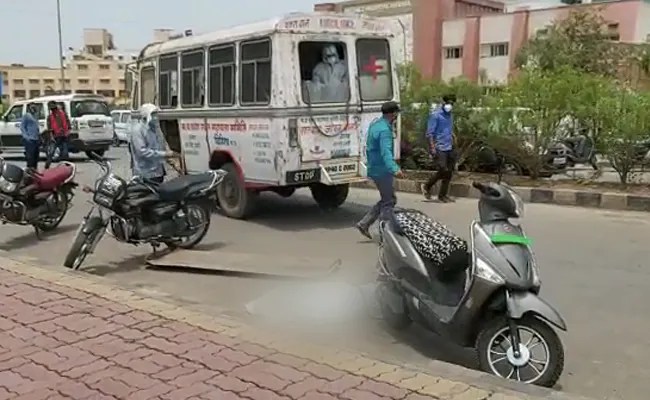 Coronavirus: The body fell out of the ambulance just as the vehicle left the Vidisha hospital.

Families of people who lost their battle to coronavirus at a hospital in Madhya Pradesh are alleging that bodies of their loved ones are not being handed over to them. A morbid video from a government hospital in Vidisha district, 57 km from state capital Bhopal, describes the horror that grieving families are facing.

In the video, an ambulance, which has the body of a Covid victim, is seen leaving the hospital. Just as it leaves the gates and takes a turn, the body is flung out of the bus and it falls on the road. A couple of men are seen rushing towards the covered body. A person in a PPE suit can be seen standing and looking out from inside the ambulance whose glasses are broken on the rear end. The driver of the vehicle reportedly panicked and stopped the ambulance.

Allegations have emerged that the hospital authorities took the body away in the ambulance without informing the person’s family.

With the country facing its worst public health crisis due to the worrying surge in coronavirus cases and deaths every day, cremation and burial grounds in cities like Delhi, Mumbai and Lucknow are swamped.

Healthcare Products You Can Buy on Amazon, Flipkart During COVID-19 Pandemic